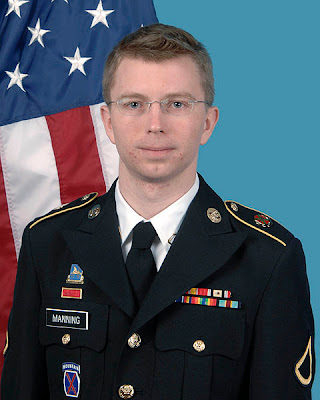 (This photo of Bradley Manning is by the U.S. Army, and was found at Wikipedia.)

The official verdict in the Bradley Manning trial was sort of a mixed bag. The judge found him innocent of aiding the enemy, but guilty of six counts of violating the Espionage Act. Of course, this brings up the question of who he had performed that espionage for. If it wasn't the enemy, then who did he do it for? There is no evidence that Manning released the information on behalf of any other country.

The truth is that he did it for the citizens of this nation -- the United States of America. He did not endanger any military personnel. He simply exposed the lies our government had been telling, by giving the American people the truth. And that makes the charges of espionage rather ludicrous, since in a representative democracy the government is the people. His only real crime was in embarrassing the elected leaders of this country, and sadly, that is a crime those leaders consider to be unforgivable.

Now we wait to see what Manning's punishment will be. I could see him being kicked out of the Army (with whatever kind of discharge they want to give him), but I don't think he should have to spend any more time in prison. He did nothing to hurt this country. Of course, he's not being punished for hurting the country. He's being punished for embarrassing elected officials -- and that means he will probably get a long prison sentence.