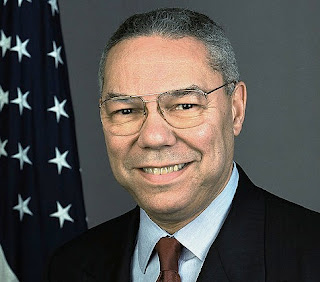 With each passing day, the United States government creeps closer to taking military action against the Syrian government -- especially since that government has been accused of using chemical weapons against its opponents. The idea is that Syria must be punished for this violation of international law, and some are urging the United States to attack. The current belief is that the U.S., with help from some other NATO countries, will probably attack with cruise missiles.

Frankly, this smacks of the same kind of reasoning that resulted in the invasions and occupations of Iraq and Afghanistan -- a thinking that somehow the military of the United States is so powerful that it could quickly settle the situation. Unfortunately, that reasoning proved faulty in both Iraq and Afghanistan (as it did years earlier in Vietnam), as we found that trying to impose a political solution at the end of a gun was far different than fighting a conventional war.

Former Secretary of State Colin Powell seems to have learned his lesson after the debacles in Afghanistan and Iraq, and he is now urging caution before engaging in the Syrian conflict with military force. He told Bob Schieffer on "Face The Nation":

"I have no affection for Assad. He's a pathological liar."

"I am less sure of the resistance. What do they represent? Is it becoming even more radicalized with more al Qaeda coming in, and what would it look like if they prevailed and Assad went? I don't know."

"In both Egypt and Syria, America has to take a much more clever role. We shouldn't go around thinking that we can really make things happen. We can influence things and we can be ready to help people when problems have been resolved or one side has prevailed over the other."

"To think that we can change things immediately just because we're America, that's not necessarily the case," Powell said. "These are internal struggles."

Mr. Powell is right. I just wish he had this much insight a decade or so ago, when he was played a fool by the Bush administration by sending him out to make the case for invading Iraq (by telling what turned out to be a pack of lies). I don't think Powell knew at the time that the information he was given was known by many in the administration to be untrue, but he seems to be much more cautious of taking a stand for war these days without knowing everything.

Meanwhile, another poll shows that most Americans are not yet ready for another war. A new Rasmussen Poll (conducted on August 23rd and 24th of 1,000 likely voters nationwide -- with a 3 point margin of error) tells us that only 31% of Americans think the U.S. should provide increased military assistance to the Syrian rebels, while 37% remain opposed and 33% are undecided. 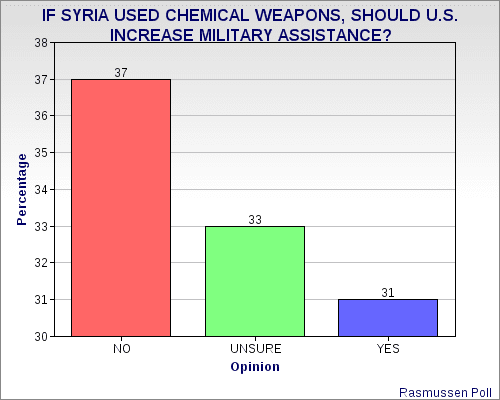