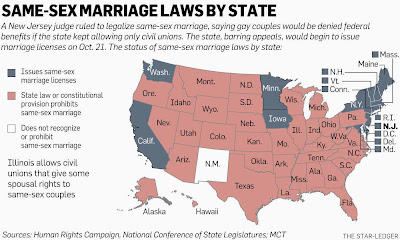 (The image above is from the website of the New Jersey Star-Ledger.)

It looks like another state may soon be joining the ranks of those that allow same-sex couples to legally marry. On Friday, State Superior Court Judge Mary Jacobson ruled in favor of six same-sex couples, and granted them an emergency order directing the state of New Jersey to begin allowing same-sex marriages no later than October 21st. She wrote in her opinion:

"Same-sex couples must be allowed to marry in order to obtain equal protection of the law under the New Jersey constitution."

Of course, Republican Governor Chris Christie disagreed with the ruling. He said the state would appeal the judge's ruling -- all the way to the Supreme Court if necessary. But like other Republicans, Christie is trying to fight an idea whose time has come. That was verified by another poll just this last week (by a conservative business-oriented news service).

The survey was done by the Bloomberg News, and was conducted between September 20th and 23rd of 1,000 nationwide adults, with a 3.1 point margin of area. The chart below shows the results -- that a clear majority of Americans now support allowing legal same-sex marriages.