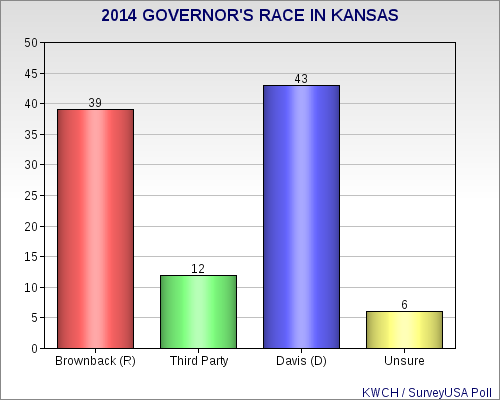 I have to admit that the results of this poll surprised me a bit. The incumbent governor of Kansas (Sam Brownback) is currently trailing his Democratic opponent (Paul Davis) in his bid for re-election. While it is not unheard of for Kansas to elect a Democrat to that office, it is not commonplace either. Since becoming a state, Kansas has elected 32 Republicans and 11 Democrats (and 2 Populists) -- or about three times as many Republicans as Democrats.

And the most surprising part of the poll is that Brownback has lost support among Republicans (his own party). He is currently enjoying the support of only 59% of Kansas Republicans, while 24% say they support the Democratic candidate and another 12% say they will vote for a third party candidate. Meanwhile 87% of Democrats say they support their own party's candidate (while 8% support Brownback and 4% support a third party candidate).

This makes me wonder -- are voters trending away from Brownback because of his far-right-wing governing of the state, or is the anti-Republican feeling of Washington's congressional Republicans beginning to filter down to the individual states? It could be the latter, since Brownback was the state's U.S. Senator before running for governor and his far-right-wing positions are well-known to the people of Kansas.

These numbers are from a KWCH-TV / SurveyUSA Poll taken on October 23rd and 24th of 600 Kansas adults (with a 4.4 point margin of error).
Posted by Ted McLaughlin at 12:02 AM