Pope Says An Unregulated Capitalism Is Tyranny -- And He's Right 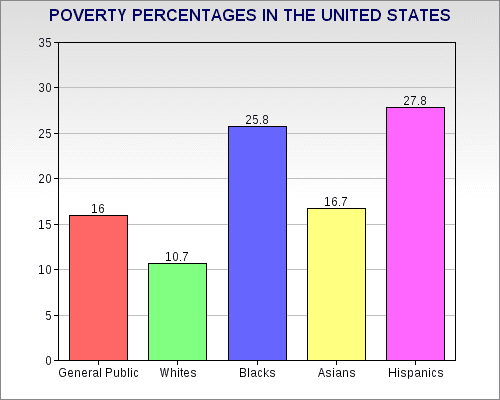 The chart above shows the rather shocking poverty situation in the United States. About 16% of the population (or 49.7 million Americans) live in poverty. And that's really an undercount, since millions are put just above the poverty line by partaking in government social programs like food stamps. If you take away the help from government, the percentage jumps up to at least 17.6% of the population.

And the Republicans would like to increase the ranks of the poor. They want to significantly reduce the social programs (food stamps, welfare, housing subsidies, unemployment insurance, etc.) while refusing to raise the minimum wage (or abolishing it) and reducing benefits for Social Security and Medicare -- all of which would just make the poverty situation even worse. Remember, about half of the population are in families that make less than 150% of the poverty line (putting most of them just a paycheck or two away from dropping into poverty).

And that is just the United States -- the richest country in the world (making these figures indefensible). There are many countries who are as bad or worse off than the United States. Poverty is an international problem, and it is a growing problem in most countries (including the United States). And one reason it continues to grow is the deregulation of capitalism.

In the United States, we still follow the failed Republican-initiated economic policy called "trickle-down". This policy removes regulations from corporations & financial institutions and lowers taxes for the rich while giving huge subsidies to large corporations -- and it does this while imposing a severe austerity on everyone else. The obvious (and documented) result is that the rich get richer and the ranks of the suffering poor grow larger. And the United States is not the only country that follows this pattern of deregulating capitalism and increasing poverty.

Liberals have long decried this hard-hearted and greedy policy, and now it looks like they have an ally. Churches (especially the Catholic and evangelical churches), while mouthing a concern for the poor, have supported government policies that actually work against the poor, and swell their ranks. That may be partially changing, because there's a new Pope in the Vatican and he seems to want to strike at the roots of modern poverty -- unregulated capitalism. In his latest apostolic exhortation (an 84 page document outlining his vision for the church) Pope Francis goes right to the point, and calls unfettered capitalism a tyranny. Here are a few more of his remarks on poverty and capitalism:

"Just as the commandment 'Thou shalt not kill' sets a clear limit in order to safeguard the value of human life, today we also have to say 'thou shalt not' to an economy of exclusion and inequality. Such an economy kills."

"How can it be that it is not a news item when an elderly homeless person dies of exposure, but it is news when the stock market loses 2 points?"

"As long as the problems of the poor are not radically resolved by rejecting the absolute autonomy of markets and financial speculation and by attacking the structural causes of inequality, no solution will be found for the world's problems or, for that matter, to any problems."

"I beg the Lord to grant us more politicians who are genuinely disturbed by the state of society, the people, the lives of the poor."

I am not a religious person (as regular readers of this blog will know), but I have to say that I am liking this Pope more all the time. He seems to have actually read, and wants to follow, Jesus' command that we should help the poor (and that greed is not a christian value). The only disagreement I would have is who must initiate the solution to the travesty of poverty. He calls on god. I think it is the people who must make this happen. 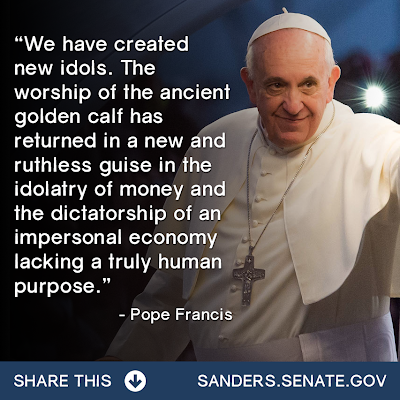