Time Is Running Out For The GOP On Health Care Reform 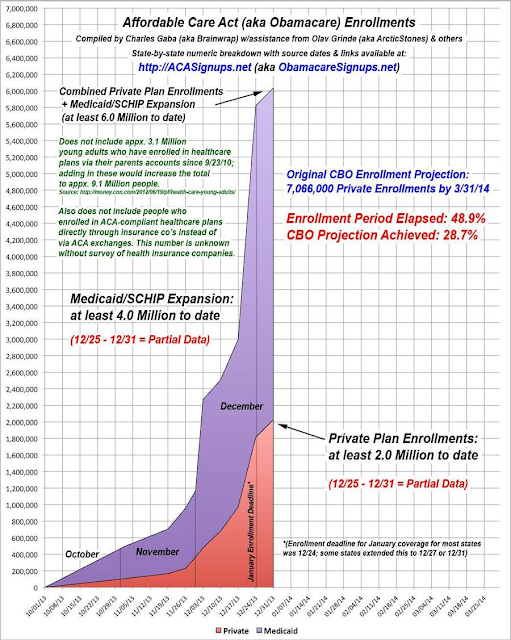 The chart above is from the website ACAsignups.net. It shows the number of people who have signed up for health insurance coverage under the new Affordable Care Act (Obamacare) -- and those numbers are rising rapidly.

The Republicans have done everything they can to keep Obamacare from working -- to keep the president (and Democrats) from getting any credit for helping more Americans to be covered with health insurance (and better insurance for many already covered). They have tried to repeal it about 40 times, have urged Americans to not buy insurance through the exchanges (claiming it is "socialism"), and have directed cyber attacks at the federal website (set up for people who live in Republican-controlled states refusing to set up a state insurance exchange). But those efforts have been in vain.

The enrollment figures started off slow -- due to a glitch in the federal website and tentative acceptance by the public. Less than 100,000 people signed up for private insurance through the exchanges in October. And November wasn't much better, with the total enrollment still short of 400,000 people. But the glitches in the federal website have largely been fixed, and the state sites are working well -- and the enrollment has mushroomed in December.

So far, a total of 2,025,432 people have signed up for private insurance through the state and federal insurance exchanges (about 1.1 million on the federal site alone). There are still those who say the original CBO estimate of 7,066,000 by March 31st will not be met, but I'm not sure at all that they are right. The sign-ups are growing and there are still three months left in the sign-up period. I believe that estimate is still within reach.

But whether the 7 million figure is reached or not, the enrollment figures are already a nightmare for the GOP. Just add up the figures. First you have 2,025,432 people who have purchased private insurance (most of whom did not have insurance before signing up). Then you have an additional 4,009,595 people who have qualified through the exchanges for Medicaid/SCHIP. Add to that the more than 3.1 million young people under 26 who have been added to their parents' insurance plans. That totals up to more than 9.1 million Americans who now have insurance (and who did not have insurance before Obamacare went into effect).

If time has not already run out for the GOP efforts to stop Obamacare, it is fast running out. Can they really take the political hit of denying insurance to more than 9.1 million people -- and by March 31st that figure could be well over 14-15 million people. And by 2016, the soonest the GOP could possibly win the White House and repeal Obamacare, these people are going to be convinced that Obamacare was a good thing (which provided them with inexpensive insurance) and many more are going to see that they now have better insurance than before at a cheaper price. Trying to repeal Obamacare then would be political suicide.

That is why the GOP has tried so hard to derail Obamacare in the past couple of years. They knew that once it kicked in and millions began receiving cheaper and better insurance (or receiving insurance for the first time), there would be no way they could dismantle the program. And that is now happening.
Posted by Ted McLaughlin at 12:06 AM