A Couple Of Good Signs For Wendy Supporters 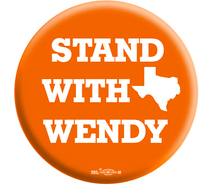 Greg Abbott started the governor's race in Texas far ahead of State Senator Wendy Davis (the most likely Democratic nominee). That's because he already had millions of dollars in his campaign chest before Wendy even declared her candidacy (and started to raise funds).

But there have been a couple of signs recently that this race may not be as lopsided as other recent campaigns for governor have been.

This first is the amount of money both candidates raised in the last six months of 2013. The totals were very equal, with Wendy topping Abbott by a few hundred thousand dollars. It is becoming clear that Wendy will not face the same handicap that other Democratic candidates have had to endure -- the lack of adequate funds to run a statewide and aggressive campaign.

The second regards small donors (those giving between $1 and $100 to a candidate). Wendy is winning the small donors over by a large margin. While Abbott got only $384,878 from small donors in the last half of 2013, Wendy pulled in $3,000,000 from small donors (meaning she has 10 times the number of small donors or more). And while the donations these small donors can afford is not in the class with a rich person, there are a lot more of them and their vote counts just as much.

Frankly, I'm buoyed by both of these signs, and I'm still thinking the Democrats might finally have a candidate that has a chance to be elected.
Posted by Ted McLaughlin at 12:04 AM