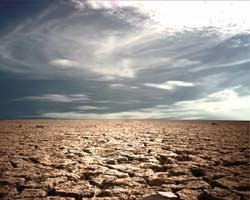 (This image of drought in the Texas Panhandle is from the website of News Channel 10 in Amarillo.)

The drought here in the Texas Panhandle has yet to end, but it now has been recognized as record-breaking. Texas State Climatologist John Nielson-Gammon says the previous three years of drought have been the driest three year period on record -- beating the previous record years of 1954-56 and 1933-35 (during the Dust Bowl years).

The current period hasn't lasted as long as the drought in the mid-1950's, but it has been more severe -- and it's not over yet (so it could capture the duration record before it's over). The area has only had about 34.5 inches of rain in the last three years. That's far short of the normal average of 61 inches, and the first year of this drought (2011) only had 7 inches of rain. Drought is becoming the normal thing here -- with the last drought ending in 2009 (only two years before this one started).

The hardest hit counties right now (the ones with extreme and exceptional drought) are Dallam, Hartley, Sherman, Moore, Oldham, Potter, Randall, Carson, and Deaf Smith. Amarillo (my home) straddles the county lines of Potter and Randall.

I know many right-wingers will deny it, but I am starting to believe this almost perpetual state of drought is a result of global climate change. While this climate change (brought on by human overuse of fossil fuels) has brought hurricanes, typhoons, flooding, tornados, and various other changes to many parts of the world, it is bringing drought to the Texas Panhandle -- and that is not good for this are because it depends on farming and ranching.

How much longer are we going to have to wait for government (actually all governments everywhere) to take action? Do we really want to leave our children and grandchildren a world worse than the one we inherited? Are we that poor a generation?
Posted by Ted McLaughlin at 12:02 AM