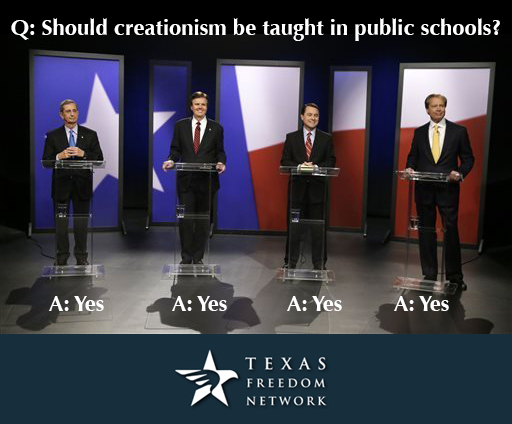 Texas government is dominated by teabagger/fundamentalist Republicans, and for years now we have been fighting to keep religion out of the science classes in our public schools. Recently we beat back an effort by right-wingers on the State Board of Education to require the teaching of creationism in schools. They were trying to include that religious concept in the state-approved science textbooks.

Unfortunately, that did not end the fight. We learned recently that several charter schools (private schools that receive state funding) are teaching creationism in their science classes. This is a clear violation of the Constitution, but it is happening nonetheless -- and it will probably require a herculean effort to get it stopped.

And if the recent debate among the Republican candidates for Lt. Governor are any indication, we won't be getting any help from the Republican-dominated state government. The four Republican candidates (current Lt. Governor David Dewhurst, State Senator Dan Patrick, Land Commissioner Jerry Patterson, and Agriculture Commissioner Todd Staples) were all asked during the debate whether creationism should be taught in public schools and included in school science textbooks. All four of them said yes -- they all thought creationism should be taught as science.

Obviously the battle against teaching religion as science in Texas public schools is far from over. This makes it more important than ever to see a Democratic slate of candidates is elected next November to head the state government -- Wendy Davis as governor, and Leticia Van de Putte as lt. governor.
Posted by Ted McLaughlin at 12:04 AM