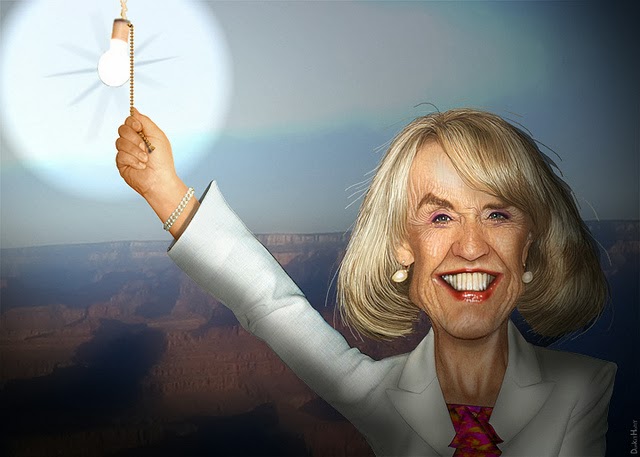 (This caricature of Arizona Governor Jan Brewer is by DonkeyHotey.)

I wrote the other day about Arizona's "cover your bigotry with religion" bill. The bill had passed both houses of the Arizona legislature and had been sent to the governor. It would have allowed businesses in that state to refuse service to members of the LGBT community by claiming it violated their religious beliefs. It was nothing more than an attempt to use religion as a justification to discriminate.

"To the supporters of the legislation, I want you to know that I understand that long-held norms about marriage and family are being challenged as never before. Our society is undergoing many dramatic changes. However, I sincerely believe that Senate Bill 1062 has the potential to create more problems than it purports to solve. It could divide Arizona in ways we cannot even imagine and no one would ever want.

"Religious liberty is a core American and Arizona value. So is non-discrimination."

Brewer's veto has upset right-wing fundamentalists across the nation. They were upset that their attempted end run around anti-discrimination laws had failed (just like their similar attempt to use religion as an excuse to continue discrimination against African-Americans had failed a few decades earlier).

But whether they want to admit it or not, Governor Brewer did the Republican Party a big favor by vetoing the bill. While the bill may have made the GOP's teabagger base happy, most Americans opposed the bill (considering it to be legalized discrimination) -- and the Republicans have enough problems appealing to most voters without another reminder of how out of step they are with the beliefs of most Americans.

And this bill was out of step with the general public. A new Rasmussen Poll (taken on February 25th and 26th of 1,000 nationwide adults, with a margin of error of 3 points) showed that about 66% of the public (or two out of every three Americans) opposed the bill, while only about 20% (or one out of every five Americans) supported it. Another 14% weren't sure what to think of it. 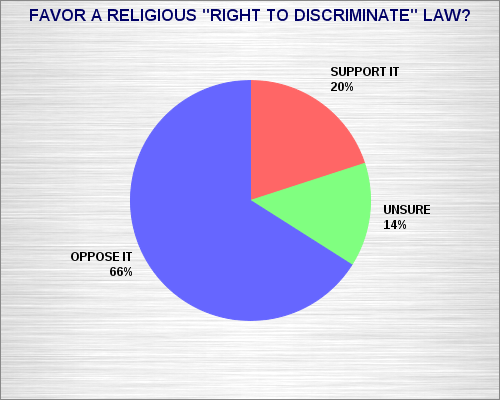