A New IRS Scandal (And This Time It's Real) 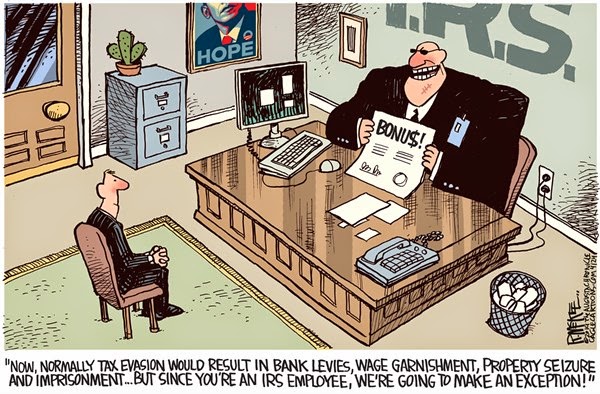 (The cartoon image above is by Rick McKee in The Augusta Chronicle.)

The Republican Party absolutely hates the Internal Revenue Service (IRS), because the IRS tries to make the GOP's rich buddies on Wall Street and in the corporations pay at least a little bit in taxes -- and making the rich pay taxes is never OK with the Republicans.

But the Republicans are still trying to make something out of that non-story. They've never minded spreading a few lies, or beating a dead horse. And the crazy part is that they don't need to do this. The IRS has a new scandal brewing, and it looks like this one is real.

Over the last couple of years, the IRS has paid out about $2.8 million in bonuses (and provided thousands of hours in paid leave. The problem is that is the amount that has gone to agency employees who have documented disciplinary problems. And perhaps worst of all, at least $1 million went to employees who avoided paying their own taxes. Calling this outrageous is an understatement.

These employees are being rewarded for making ordinary Americans pay the taxes they owe, when they have intentionally tried to avoid paying the taxes they owe (and were caught and disciplined by the IRS). This cuts to the heart of the IRS mission. How can they be trusted to be fair with the public, when they are rewarding those in their own ranks who have avoided paying their own taxes?

I wouldn't blame the right-wingers for attacking the IRS over this issue. In fact, I think this is an issue that those on both the right and left can agree is wrong. It should be a minimum requirement for all IRS employees to fully and honestly pay their own taxes (just like we expect policemen to not steal and firemen to not start unnecessary fires). Bonuses should be saved to be given only to employees who don't violate the very mission of the agency they work for.
Posted by Ted McLaughlin at 12:06 AM