American Public Says No To Military Action in Iraq

As you know by now, Iraq has exploded in violence and war again. It has never been violence free since we invaded, but at least for a while after our troops left the violence was a bit subdued. Now though, they are in the middle of a vicious religious civil war. And sadly, but expected, the neocon Republicans (like McCain and Cheney) want us to get back in the middle of that conflict.

And President Obama seems to be letting himself be pushed back into more military action in Iraq. He first said he would not send troops back to that country, but broke that promise just a couple of days later. He now says he'll send 300 military "advisors" (shades of Vietnam) to Iraq. And he's also thinking of bombing the ISIS rebels. Of course these are the same people that we were sending aid to (including arms) just a few months ago (when they were posed as the "good" guys in Syria).

That just shows you what a ridiculous mess the situation in that part of the world is. And a majority of the American people seem to know this. They don't want the U.S. to engage in any kind of new military operation in Iraq. Only 34% of Democrats, and 39% of Independents and the general public would support military action, while 54% of Independents and the general public , and 60% of Democrats, would oppose that. Only the Republicans have a slim majority favoring new military action in Iraq. It seems like 13 years of a seemingly endless war hasn't taught the Republicans anything.

It doesn't really come as a surprise to me that Americans don't want more fighting. Note in the chart below that it took Americans less than two years to realize that invading Iraq was a big mistake, and they have kept that attitude for the last 8 years. 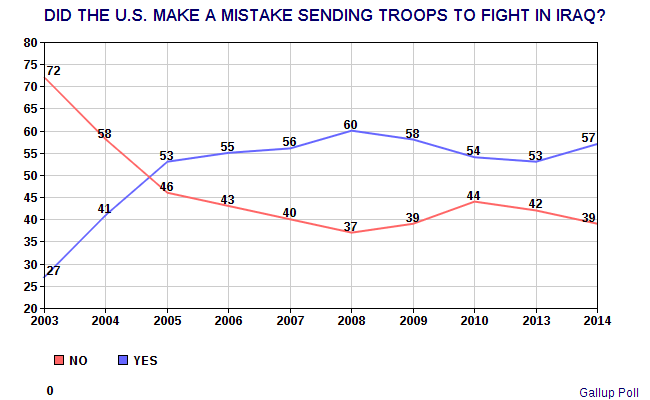 The numbers above are from a new Gallup Poll. The survey was done on June 20th and 21st of about 1,010 adults nationwide, with a margin of error of 4 points.
Posted by Ted McLaughlin at 12:04 AM