Temper The Enthusiasm Over The Mississippi Runoff 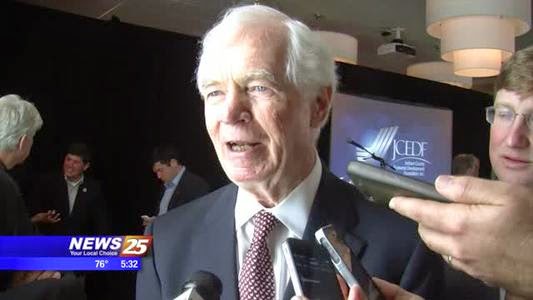 (The image above of Thad Cochran is from wxxv25.com.)

The media headlines regarding Mississippi's GOP runoff election for U.S. Senate this morning talk about the defeat of the teabaggers in that state. One source even called it a "crippling defeat" for the extreme right. I think it's time we considered the reality.

These headlines make it sound like a moderate defeated a teabagger in Mississippi, but that's not what happened. There was no moderate in that race. When was the last time Thad Cochran voted as a moderate in the Senate, or even considered compromising with the Democrats for the good of the country? All I can remember him doing is voting in lock-step with the extreme right-wingers.

What we really had in that Mississippi runoff was a fairly sane teabagger running against a bat-crap crazy teabagger. And Cochran's "sanity" doesn't mitigate his extremism at all -- it just keeps him from making crazy statements that might hurt him in November. The only difference between the two candidates was the tone of their rhetoric.

There is talk now of how angry the teabaggers are, and some are even saying they might abandon Cochran in November. I don't believe it. They might not be happy with his slightly milder rhetoric, but they know he'll continue to vote as a right-wing extremist, and they'll vote for him in November.