Public Is Starting To Understand "Trickle-Down" Is Nonsense 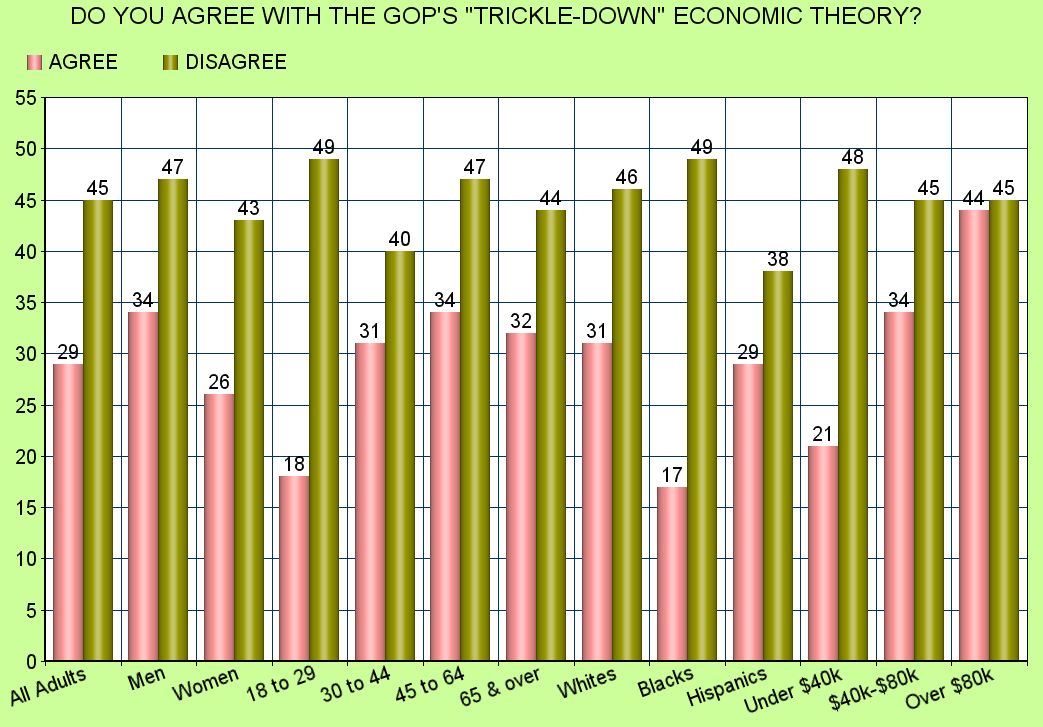 Since the Reagan administration the Republicans have instituted and protected an economic theory they have long believed in -- a theory that led to the vast wealth and income inequality of the 1920's, and led directly to the Great Depression. That theory has once again led to a huge gap in wealth and income between the rich and the rest of America, and that gap is still growing.

That economic theory is commonly called the "Trickle-Down" theory. The idea is that what's good for the rich and the corporations is good for all Americans -- and that when the wealth and income increases for the rich, some of it will trickle down to the rest of America.

This theory dictates that labor unions should be weakened, that the minimum wage should be kept low (or abolished), that corporations should get big subsidies from government and be allowed to export jobs to low-wage countries, that Wall Street and the giant financial institutions should be deregulated, and that government social programs should be drastically cut (or eliminated). But the main thrust of this theory is to keep lowering taxes for the rich and the corporations.

If this economic theory really worked, then we should be in the midst of a booming economy -- an economy that is creating jobs and increasing the well-being of all Americans. After all, the theory has been in effect for at least three decades now. But instead of benefitting all Americans, it has had just the opposite effect.

Wages are stagnant (and have been for decades), the middle class is shrinking, the minimum wage has lost a third of its buying power, good jobs are being exported and replaced with low-wage jobs, millions of Americans remain jobless, poverty and hunger continue to grow, and a college education has been priced out of reach of many people. The theory in application has fattened the bank accounts of the rich and the profits of corporations, but nothing has trickled down to the bottom 80%-90% of Americans.

And the Republicans, after seizing control of both houses of Congress, want to double-down on their failed theory. They want to give even more tax cuts to the rich and the corporations, and pay for it with more cuts to government programs that help the poor, uneducated, unemployed, and other disadvantaged people.

Fortunately, the American people are starting to realize just how much they have been fooled by the GOP's unfair view of economics. As the top chart shows, only 29% still believe the "Trickle-Down" theory can work, while 45% no longer believe in it (a 16 point gap). And when the question is asked differently, focusing on the main tenet of the theory (cutting taxes for the rich), the gap grows to 24 points (with 25% saying it'll work and 49% saying it won't). That is illustrated by the chart below.

This gives me some hope that a change can be made, and we can institute economic policies that will be fair to all Americans. Unfortunately, the Republicans are still pandering to the rich, so that change will require voting them out of power -- and that cannot happen until at least 2016.

These charts were made from a new YouGov Poll that was done on January 21st and 22nd of a random national sample of 1,000 adults, with a margin of error of about 4 points. 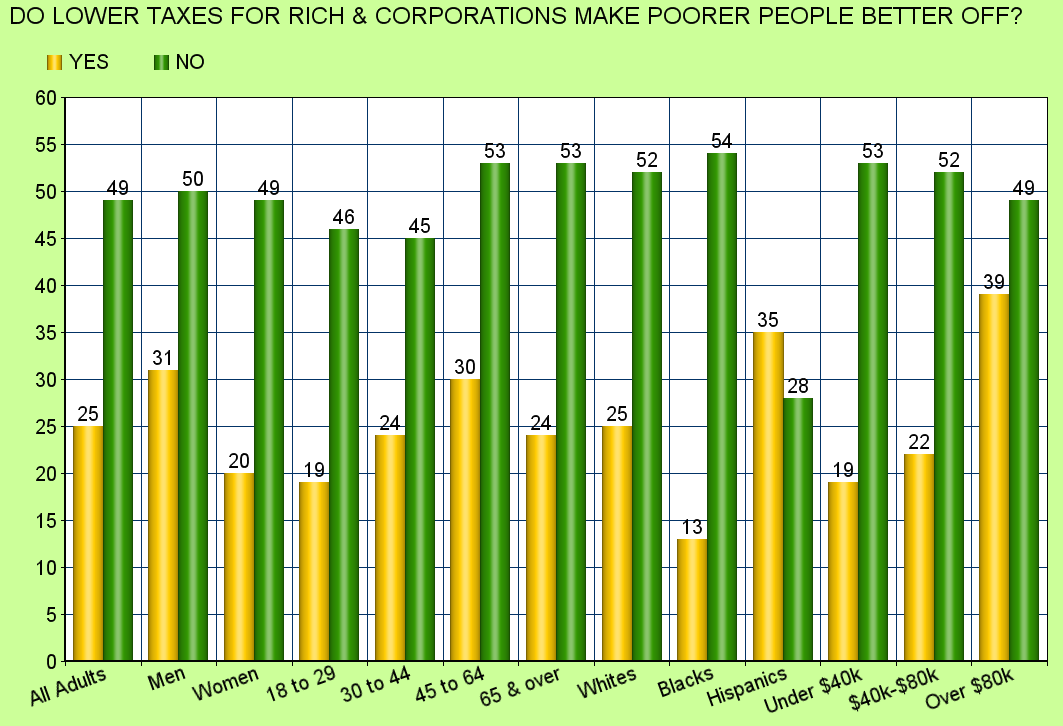