Most Terrorists In The West Are NOT Islamic Jihadists 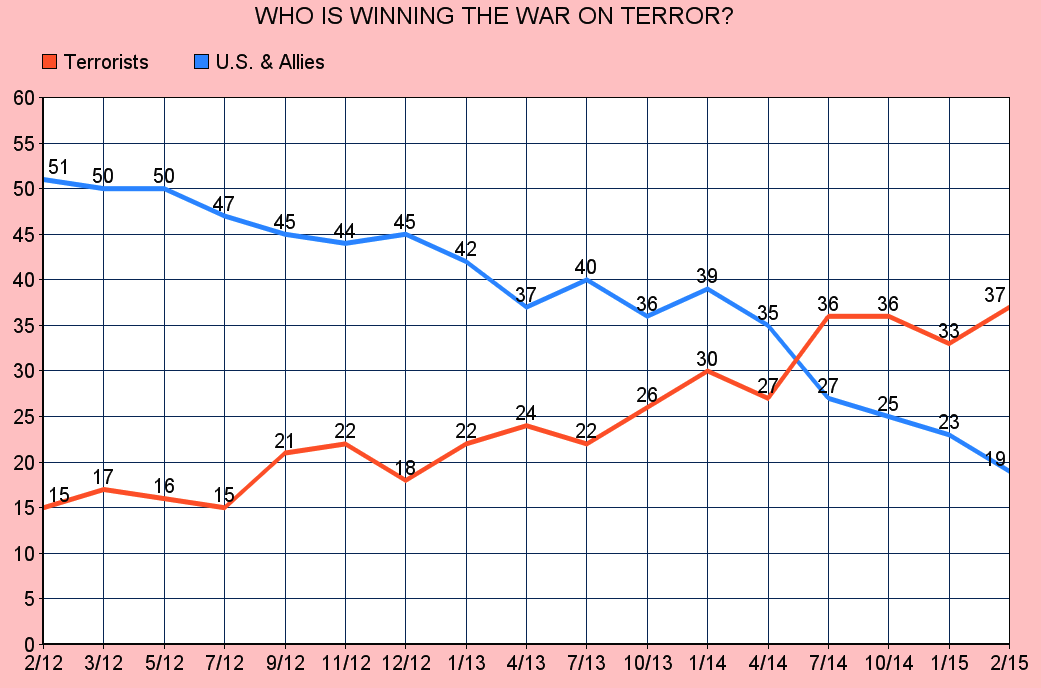 The chart above was made from a series of Rasmussen Polls, done between February of 2012 and February of 2015. The latest was done on February 20th and 21st of a random national sample of 800 likely voters. All of the surveys were done with between 800 and 1,000 adults, and had margins of error of between 3 and 3.5 points.

The survey shows a remarkable drop in the percentage of Americans who believe we are winning the "war on terror" -- from 51% a couple of years ago to about 19% this month (a whopping 32 point drop). Obviously the media coverage of ISIS, al-Queda, and other islamic groups, combined with the fear mongering by many of our politicians is having a big effect on the public.

Unfortunately, this is a gross misrepresentation of the truth. While the media and the politicians are trying to whip up fear of muslims (and their extremists), the fact is that people in the West (North America and Europe) face far less danger from islamic extremists (jihadists) than they do from their own home-grown non-islamic terrorists.

Take for example an article written for The Daily Beast by Dean Obeidallah. Here is part of that article, revealing the truth about terrorism in the West:


Obviously, there are people who sincerely view themselves as Muslims who have committed horrible acts in the name of Islam. We Muslims can make the case that their actions are not based on any part of the faith but on their own political agenda. But they are Muslims, no denying that.
However, and this will probably shock many, so you might want to take a breath: Overwhelmingly, those who have committed terrorist attacks in the United States and Europe aren’t Muslims. Let’s give that a moment to sink in.
Now, it’s not your fault if you aren’t aware of that fact. You can blame the media. (Yes, Sarah Palin and I actually agree on one thing: The mainstream media sucks.)
So here are some statistics for those interested. Let’s start with Europe. Want to guess what percent of the terrorist attacks there were committed by Muslims over the past five years? Wrong. That is, unless you said less than 2 percent.
As Europol, the European Union’s law-enforcement agency, noted in its report released last year, the vast majority of terror attacks in Europe were perpetrated by separatist groups. For example, in 2013, there were 152 terror attacks in Europe. Only two of them were “religiously motivated,” while 84 were predicated upon ethno-nationalist or separatist beliefs. . .
Back in the United States, the percentage of terror attacks committed by Muslims is almost as miniscule as in Europe. An FBI study looking at terrorism committed on U.S. soil between 1980 and 2005 found that 94 percent of the terror attacks were committed by non-Muslims. . .
In fact in 2013, it was actually more likely Americans would be killed by a toddler than a terrorist. In that year, three Americans were killed in the Boston Marathon bombing. How many people did toddlers kill in 2013? Five, all by accidentally shooting a gun.
But our media simply do not cover the non-Muslim terror attacks with same gusto. Why? It’s a business decision. Stories about scary “others” play better. It’s a story that can simply be framed as good versus evil with Americans being the good guy and the brown Muslim as the bad.
Honestly, when is the last time we heard the media refer to those who attack abortion clinics as “Christian terrorists,” even though these attacks occur at one of every five reproductive health-care facilities? That doesn’t sell as well. After all we are a so-called Christian nation, so that would require us to look at the enemy within our country, and that makes many uncomfortable. Or worse, it makes them change the channel.
That’s the same reason we don’t see many stories about how to reduce the 30 Americans killed each day by gun violence or the three women per day killed by domestic violence. But the media will have on expert after expert discussing how can we stop these scary brown Muslims from killing any more Americans despite the fact you actually have a better chance of being killed by a refrigerator falling on you.

And then we have this unsettling bit of truth from the Southern Poverty Law Center:

Since 2000, the number of hate groups has increased by 56 percent. This surge has been fueled by anger and fear over the nation’s ailing economy, an influx of non-white immigrants, and the diminishing white majority, as symbolized by the election of the nation’s first African-American president.
These factors also are feeding a powerful resurgence of the antigovernment “Patriot” movement, which in the 1990s led to a string of domestic terrorist plots, including the Oklahoma City bombing. The number of Patriot groups, including armed militias, skyrocketed following the election of President Obama in 2008 – rising 813 percent, from 149 groups in 2008 to an all-time high of 1,360 in 2012. The number fell to 1,096 in 2013.
This growth in extremism has been aided by mainstream media figures and politicians who have used their platforms to legitimize false propaganda about immigrants and other minorities and spread the kind of paranoid conspiracy theories on which militia groups thrive.

The truth is that Americans face very little danger from terrorism. An American is far more likely to be hit by lightening than killed by any kind of terrorist -- and far more likely to be killed by a home-grown non-islamic terrorist than by an islamic extremist. The politicians, especially the Republicans, won't tell you this because that would anger many on the right who support them. These people want to believe that all terrorism comes from a different religion and a different country -- and have no desire to look at their own bigotry in the mirror.

And it's nearly as bad with the media. They only cover stories that people want to hear -- stories that will increase their readership or viewership. Looking too hard at home-grown terrorists or other violence in this country just brings criticism, and sadly, they are more in the business of selling advertisements than in telling the uncomfortable truth.

If you doubt what I am saying, just look at this long and rather frightening list of terrorism in the U.S. by the radical right since the Oklahoma City bombing. It was composed by the SPLC.
Posted by Ted McLaughlin at 12:02 AM