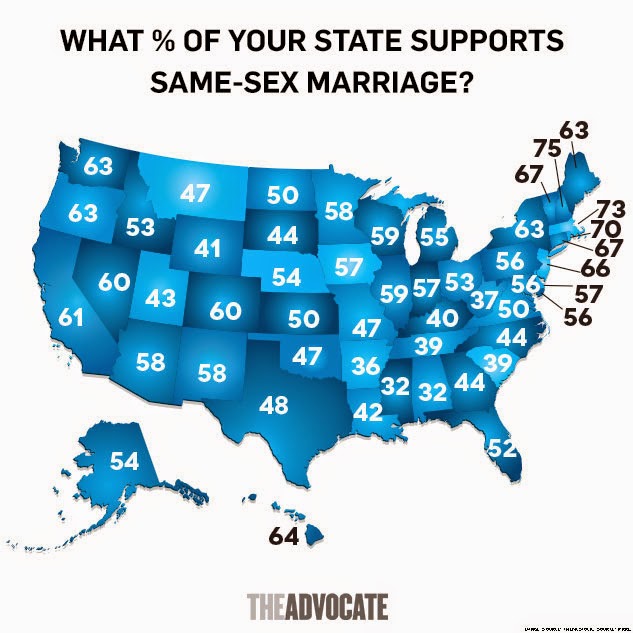 The map above was made from information from the Public Religion Research Institute (in their American Values Atlas). They did over 50,000 interviews in the United States during the 52 weeks of 2014 to get these numbers. They found that for the entire year of 2014, about 54% of all Americans supported the legalization of same-sex marriage. The map above shows that support for each individual state.

As you can see, the most serious opposition is in the deep South -- bible-belt states that still want to think marriage is a christian concept. Of course, this is silly -- since marriage is a secular right granted to citizens by the government (just like in other countries). While many marriages are held in religious building and officiated by religious officials, many are not -- but all must have a license from the government.

One thing I think is crazy is that when you substitute the words "civil union" for the word "marriage" the support goes way up, even in the states still trying to fight the legalization of same-sex marriages. This makes no sense at all, since those "civil unions" would have all the same rights and privileges as a "marriage". It turns out that most Americans are not really against the prospect of gays/lesbians having equal rights -- there are just a lot of people hung up on the word "marriage".

It is my servant hope though that by early summer none of those percentages will have any meaning though. Hopefully, the Supreme Court (hearing the cases about banning same-sex marriages right now) will by then have clearly established that ALL Americans have equal rights when it comes to marriage.
Posted by Ted McLaughlin at 12:06 AM