Spring Of 2015 Was The Hottest On Record 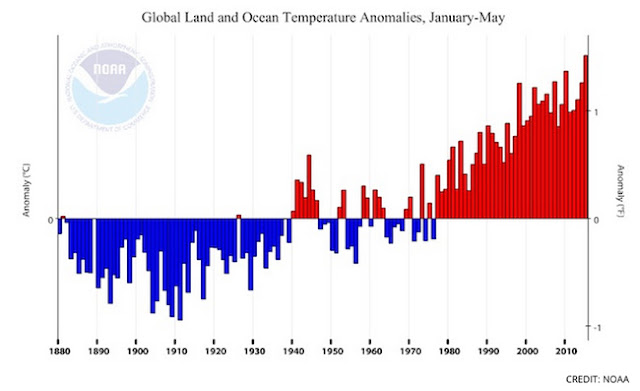 The chart above is from the National Oceanic and Atmospheric Administration (NOAA). It shows what the Republicans continue to deny -- that global warming (global climate change) continues, and is getting worse. Here is how Sara Goddard at Wonk Wire describes it:


Eco Watch: “This past May was the hottest on record, according to the National Oceanic and Atmospheric Administration (NOAA). ‘The combined average temperature over global land and ocean surfaces for May 2015 was the highest for May in the 136-year period of record, at 0.87°C (1.57°F) above the 20th century average of 14.8°C (58.6°F),’ said NOAA. This breaks the previous record, which was set last May.”
It was also the hottest March to May on record and the hottest January to May on record as well. So, if trends continue, as they are predicted to, this year will surpass last year as the hottest on record.
How long are we going to let the politicians ignore this problem? Have we become the first generation that doesn't want to leave a better world for our children and grandchildren? Do we really believe now that corporate profits are more important than saving the only planet we have?
Posted by Ted McLaughlin at 12:02 AM