Only Half Of Public Opposes National Registration of Muslims 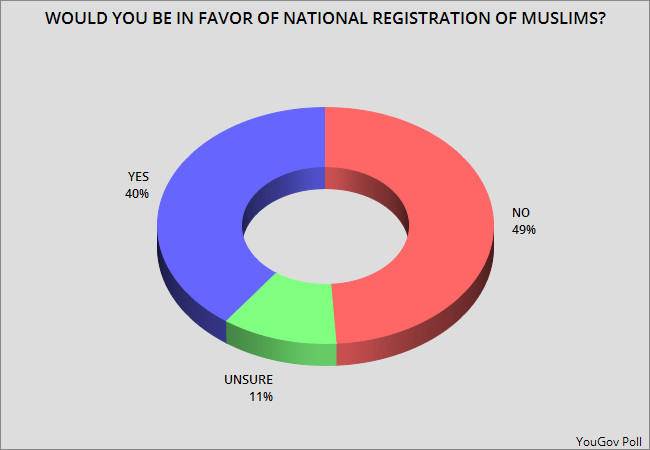 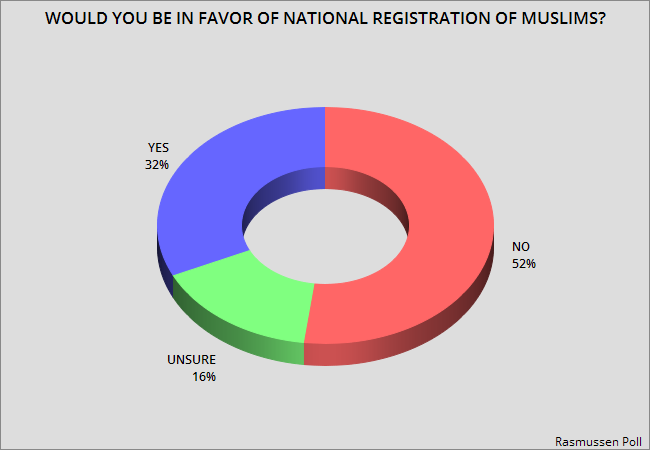 At least one of the Republican candidates (Donald Trump) has suggested that muslims in American should be required to register with the federal government. He has sort of backed off of that -- once it was pointed out that can easily be used to discriminate against them (as the U.S. did to the Japanese in World War II) or even eliminate them (as the Germans did to Jews under Hitler).

But what is even more troubling is the fact that only about half of the American public says they would be opposed to such a discriminatory registration program. That was verified by two different polls recently. In the YouGov Poll, 49% said they opposed registration. In the Rasmussen Poll, about 52% said they opposed it.

Frankly, those numbers horrify me. It means than the other half of the population would be in favor of discriminatory registration (or would at least consider it). What the hell are these people thinking? Do they think freedom is only for them? Don't they realize that what can be done to one group of people can be done to everyone? Are they so gripped by an irrational fear that they are willing to give up living in a free country?

The Republicans (and sadly, a few Democrats) have been trying to make Americans scared of muslims as a group -- and it looks like their fear mongering is being successful. Democracy can only exist in a country with people brave enough to sustain it. I'm beginning to doubt the United States is one of those countries.

The top chart is from a new YouGov Poll -- done between November 20th and 23rd of a random national sample of 1,000 adults, with a margin of error of 4.2 points.

The bottom chart is from a new Rasmussen Poll -- done on November 17th and 18th of a random national sample of 1,000 likely voters, and has a margin of error of 3 points.
Posted by Ted McLaughlin at 12:04 AM