Apple Is Right - The Government Is Overreaching 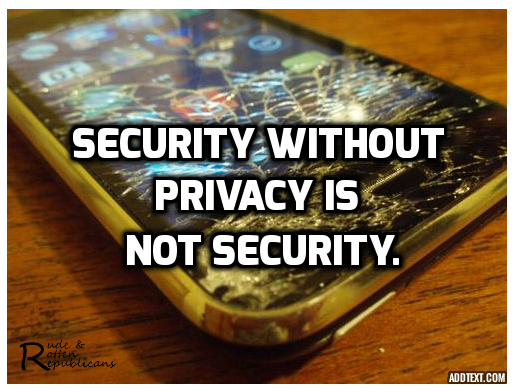 The FBI has the cell phone of the San Bernardino shooters (both of whom are dead), but they have been unable to access its contents (presumably to learn of contacts of the shooters). The phone is an Apple I-Phone, and the shooters had enabled the encryption app available. It requires a passcode to get past the encryption, and ten wrong tries would cause the information on the phone to disappear.

A California judge has determined that the FBI has the right to access the phone's information, and has ordered Apple to create a way for the government to access the information. Apple has balked, and is fighting the order. CEO Tim Cook says doing so would, in essence, create a "backdoor" that both the government and hackers could use to break into millions of I-Phones owned by innocent Americans.

He is right. The government does have the right to get the information on that phone, but they do not have to right to own a key that would allow them to break into any of the millions of I-Phones in the United States. And they should not have the right to demand those phones be vulnerable to criminal hackers.

Anyone familiar with the history of the FBI will know that they have exceeded their legal limits many times, and violated the rights of ordinary innocent Americans. There is no doubt they would misuse the ability to break into encrypted I-Phones (and if you don't believe that, then I have some ocean-front property here in Amarillo I'll sell you real cheap).

Surely, there is some middle ground here. Why can't the government give the phone to Apple, and let Apple break into it and provide the government with every scrap of information on it -- but not give the government the ability to do the same with every I-Phone in America. Wouldn't that satisfy the judge's order without endangering the privacy of innocent citizens?

It's bad enough that the unconstitutional (in my opinion) Patriot Act has legalized spying on American citizens (with no more probable cause than the government says they want it). All the government has to do is say "terrorism", and they can get a secret warrant to violate the privacy rights of any American. We should not give them any more tools to spy on citizens.

Security is important, but so is privacy -- and the former without the latter is worthless. Our forefathers provided us with inalienable rights. We must stop the federal government from continuing  to chip away at those rights.
Posted by Ted McLaughlin at 12:08 AM