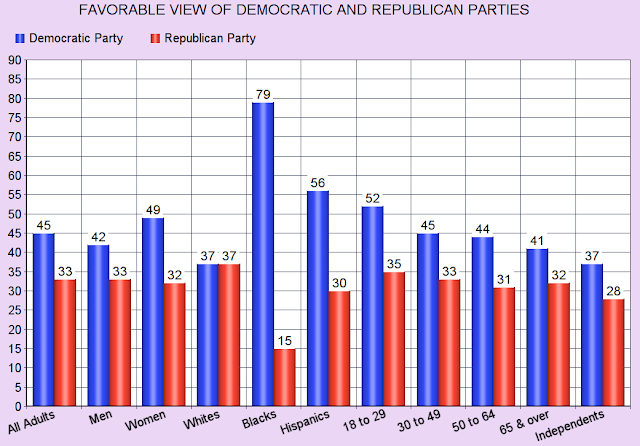 This chart should make Democrats smile a bit. It shows that the voting public looks more favorably on Democrats than Republicans by a 12 point margin (45% to 33%). And that favorable view holds across all demographic groups (gender, race, age) but one (Whites view them equally at 37%). And although I didn't include it in this chart, all education groups also favor Democrats (HS or less 42% to 36%, Some college 45% to 35%, College grad 47% to 25%, and Postgrad 56% to 26%).

Also significant in this survey was what the members of each party thought of their own party. While 88% of Democrats have a favorable view of their own party, only 68% (about two-thirds) of Republicans view their party favorably.

These numbers are from a new Pew Research Center survey -- done between April 12th and 19th of a random national sample of 2,008 adults, with a 2.5 point margin of error.
Posted by Ted McLaughlin at 12:04 AM