The Troubles Facing The Republican Party 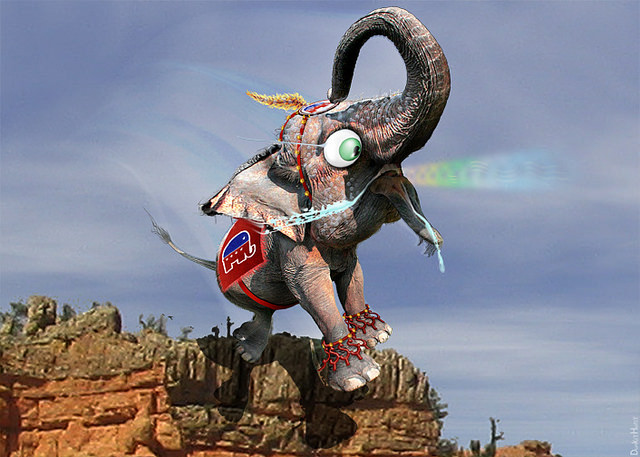 (This caricature of the Republican elephant is by DonkeyHotey.)

The Republican Party faces a bigger crisis than just having to choose between two bad candidates. It also has a growing demographic problem, and finds itself on the wrong side of many issues these days. The following post is by Stuart Rothenberg in Roll Call. He does a very good job of laying out the GOP's dilemma.


Both Donald Trump and Ted Cruz have glaring weaknesses as presidential nominees, but that’s only the beginning of the GOP's problems. Just as important, the current mix of top issues is simply terrible for Republicans in general and conservatives in particular.
The country moved noticeably to the right starting in the early 1980s with Ronald Reagan and continuing through the presidency of Bill Clinton (“The era of big government is over”) and even the first years of the George W. Bush administration.
That isn't to say that Republicans always got their way. But issues like taxes, welfare reform, crime, wasteful spending, and national security and foreign policy dominated the national debate. And that gave Republicans the upper hand with an electorate unhappy with President Jimmy Carter’s weak leadership, a Democratic Party held captive by organized labor, and a federal government that had been expanding since the Johnson administration.
Cultural issues also worked to the Republicans’ advantage as many Americans tired of the excesses of the 1960s and 1970s.
Even many Democrats demanded that their party become more pragmatic and responsive to the middle class, and the centrist Democratic Leadership Council aggressively criticized the party of George McGovern, Walter Mondale and Carter.
Today, the national debate sounds very different.
Corporate America is under assault, with income inequality and Wall Street getting more attention than jobs, wages or over-regulation. Many Americans seem hesitant to support a muscular U.S. foreign policy. Democrats are united on immigration reform and campaign finance, while the Republicans are conflicted or divided.
There was once a bipartisan consensus on free trade, but now a majority in the Democratic Party and a significant minority in the GOP oppose it. And politicians from both parties talk more about criminal justice reform than crime.
The debate over cultural issues has also changed over the past few years, fueled by changing attitudes among younger voters.
Not surprisingly, the Pew Research Center found last year that Americans are becoming less religious.
“The falloff in traditional religious beliefs and practices,” noted Pew, “coincides with changes in the religious composition of the U.S. public. A growing share of Americans are religiously unaffiliated, including some who self-identify as atheists or agnostics as well as many who describe their religion as ‘nothing in particular.’ Altogether, the religiously unaffiliated … now account for 23 percent of the adult population, up from 16 percent in 2007.”
The current issue mix strongly favors Democrats and suggests that the party will have momentum beyond the November election, assuming it retains the White House and wins a Senate majority.
This is odd given that a polarizing liberal Democrat is into his eighth year in the White House, and his party is poised to nominate an extremely damaged candidate to succeed him.
True, many of the GOP’s problems can be traced to the fact that Republican voters have been more interested in sending a message of frustration with the party’s current leadership than in selecting a nominee who could both keep the allegiance of the party faithful and attract new supporters.
But the Republicans’ problems go much deeper than their 2016 presidential nominee. The party has failed to dictate much of the national discussion despite opportunities on issues like terrorism, economic growth and government paternalism. Instead, it has preferred to argue with itself about policies, personalities and who is a real Republican.
If you are a Republican and want to blame the media for the party’s problems, go right ahead. But doing so doesn’t change the near-term reality or help the GOP frame the national debate.
None of this means that the Grand Old Party will become irrelevant next year or that the current issue mix will last. Issues come and go, and so will the current ones — though probably not until Hillary Clinton enacts part of her agenda and turns the Supreme Court considerably to the left.
The GOP could very well have a good 2018, since the midterm turnout will likely be more Republican than 2016's and midterms often offer a rebuke to the incumbent president’s party.
But Republicans have plenty of work to do to adapt to the new electorate and to the new issue mix, including looking beyond their own preferences to see what will sell nationally, among all voters.
Temper tantrums of the kind that we are seeing from GOP voters in 2016 may make the Republican rank-and-file feel good for the moment, but they aren’t a sign of seriousness or pragmatism in the adult world.
Posted by Ted McLaughlin at 12:02 AM