Another Good Supreme Court Decision To Save Lives 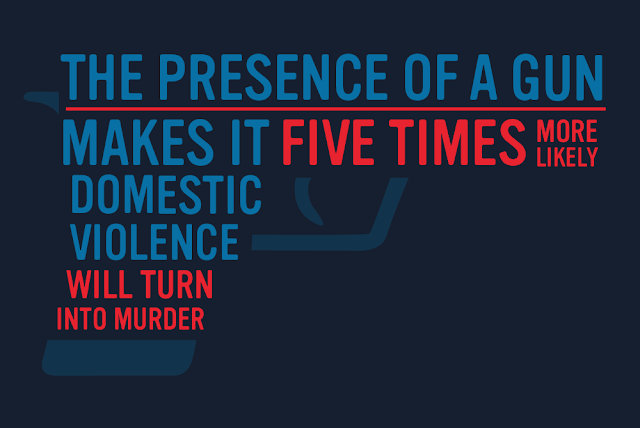 (This graphic image is from everytown.org.)

The case was Voisine vs. United States. It was brought by two men from the state of Maine -- Stephen Voisine and William Armstrong. Both had been convicted of misdemeanor assault (domestic violence). They were caught years later possessing firearms -- a violation of federal law. They argued that their cases involved "reckless conduct" rather than "intentional abuse", and therefore they should not be subject to the federal law that banned them from owning weapons.

The Supreme Court did not buy their silly argument. The court ruled that the government (federal, state, or local) could legally ban those convicted of misdemeanor domestic violence from owning a weapon -- and that such a ban does not violate the Second Amendment of the U.S. Constitution. The Court vote was 6 to 2 -- with Kagan, Breyer, Ginsberg, Alito, Roberts, and Kennedy upholding the ban. Sotomayor and Thomas dissented.

The ruling makes a lot of sense. These men, and indeed all those convicted of domestic violence (misdemeanor or felony), have shown they either cannot control their temper or have a propensity for violence (or both) -- and people who have shown that should not be allowed to own a firearm. As the graphic above states, allowing them to own a firearm just increases the likelihood that a death will occur.

The NRA leadership and other gun-nuts may not like the idea, but the right to own a gun guaranteed by the Second Amendment is not an absolute right. The Supreme Court has long ruled that government can place reasonable restrictions on that right. This decision by the court just upheld those previous decisions regarding reasonable restrictions.
Posted by Ted McLaughlin at 12:06 AM