You Can Have A Tacky Trump Ornament For Only $250 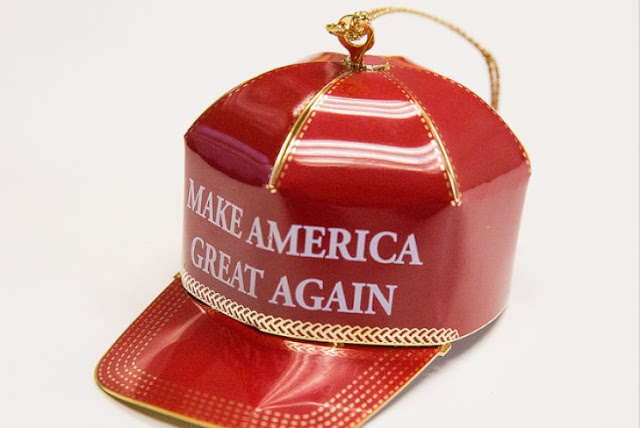 If you'd like to turn your christmas holiday into a political statement, the folks at Amazon.com will be happy to help you do that. They are selling a tacky christmas tree ornament -- a replica of the campaign cap for Donald Trump (pictured above).

Personally, I can't imagine anyone wanting to hang that abomination on a perfectly good christmas tree, but I'm sure there are Trumpistas who will love it. The ornament is made of brass and decorated in gold, and sells for the huuuuuge price of $250.

The most humorous part of this ridiculous thing though is the customer reviews on the product on Amazon's website. Here are some of those reviews:

Despite ordering a more reasonable ornament, this one arrived. It. Is. Yuge. It's absolutely yuge. It's the biggest ornament. Yuge. I hung it on my tree, but it is so yuge that it has totally unbalanced my whole tree. No matter where I hang it, the tree leans waaaaaay over to the far right.

Came with an entire crate of white hood ornaments. Great bargain! Downside: My tree is now on fire.

I didn't actually order this but somehow it's on my tree anyway. I'm trying to make the best of it... at least that's what people are telling me to do. But I don't know. I'm trying, but there's suddenly swastikas painted on my other decorations, half of my presents are just dog s***, and the tree itself is on fire. But my conservative friends are telling me the fire is a good thing and I should just be united in celebrating what this ornament has to offer. They're also saying I need to leave the tree in my house for four to eight years. That doesn't sound right. Source?

Not safe if you have cats in the house.

This ornament appeared on my tree, against my own choice, and now my tree is very aggressive towards my wife. There's empty breath mint containers around the floor near the tree, and I'm discouraging female friends and family to go anywhere near the tree.

I thought I placed the more reasonable blue ornament into my basket, but this one somehow arrived instead. The color was a little more orange than expected and the size much smaller. When I hung it on my tree I noticed the surrounding ornaments started to fade and turn a weird shade of white! I thought they were all made of quality, but I guess not. I need new ornaments to replace the faulty ones, and I'm hoping the blue one will be available again, considering it's still in such high demand!

Pros: My cat is scared of this ornament and won't go near the tree this year.The model train under the tree runs on time.Cons: It had my entire nativity scene deported.

You are going to love to hate this ornament big league. It's really really awful. That I can tell you. I mean really awful. Nothing great about it. Not great at all. Believe me.

Good God. Imagine my revulsion when I saw this loud, gaudy, worthless piece of s*** on top. And the swastikas and pointy white hoods that seem to have materialized out of nowhere. So much white, so much ugly, loud whiteness. And male. I've never seen a Christmas tree so burdened with unfocused testosterone. The ornaments are so tiny really, the tiniest. You'd think that'd be their saving grace, but they're determined to compensate for their freakish deficiencies with noise and self-assertion.I just wanna be clear about one thing. This is not my ornament. And I will do everything I can to take it down. Probably short of violence. We'll see how bad things get. And I can't help wondering which of my idiot friends and family actually thought this tacky s*** was a good idea.

There was a vote for ornaments this year, and I swear the other ornament won (it certainly had the popular vote), but some how (hacking maybe?) this ugly thing won. I refuse to put it on my tree, but somehow, it's there, like a big orange, hairy piece of I don't know what. I've call in professionals to get rid of it, but somehow it's still there. But I have hope that all of my friends will get together and maybe do something about getting it out of my house. And the worst part is it seems to be talking, making racist and sexist remarks that aren't at all appropriate. Help!

This ornament keeps tweeting at 3 a.m., demanding apologies from the casts of various Broadway musicals. For what, I don't know. You'd think now that the Christmas season has officially arrived, the tree is up, and the stockings are hung, this ornament would finally get serious about being an ornament and doing the things an ornament ought to do--you know, stuff like hanging on the tree, looking merry and bright, and not destroying the Republic in its quest to satiate an unquenchable thirst for power. But no such luck. It just keeps tweeting and tweeting and tweeting. I'm not even sure how it manages to use a phone for such time-wasting endeavors, given how microscopic its teeny-tiny, wee little hands are.

It turns out we can't get a refund and now we're stuck with the ugly thing. We put it on the side of the tree facing the wall, but it must be bewitched or something because it keeps reappearing at the top of the tree every morning! We found our angel topper in the corner crying. We don't know what happened and she says she's afraid to tell us.

I didn't recall ordering this; I ordered something else entirely. When I removed it from the box, it gave me a cut on the hand that was quite painful due to my bisexual nature. I demand a recount, I mean a refund.

This ornament was a gift I didn't want. I put it on my tree anyway, in the back, on the bottom. The next morning I couldn't find either one of my cats. The ornament had somehow moved to the top front of the tree, as well. I threw it in the trash. Then next morning there was not one, but 10 of these ornaments on my tree. I put all 10 in my neighbors trash. Next thing I know my tree was covered in these ornaments. I give up. Looks like I have to live with this ornament for the foreseeable future. I didn't buy it. I didn't want it. But now I'm stuck with it. And I still can't find my cats.

Woke up one morning to find all the gifts that had been under the tree arranged as a wall between us and the tree. This happened right after this ornament mysteriously appeared. Also, all of my Barbie ornaments seem to be frightened.

I heard the company was coming out with a matching swastika tree topper next. Can't wait! AmeriKKKa, hell yeah!

This ornament made my tree turn white as a Klansman's sheet. Would not buy again.
Posted by Ted McLaughlin at 12:04 AM