Class Membership As Self-Identified By Americans 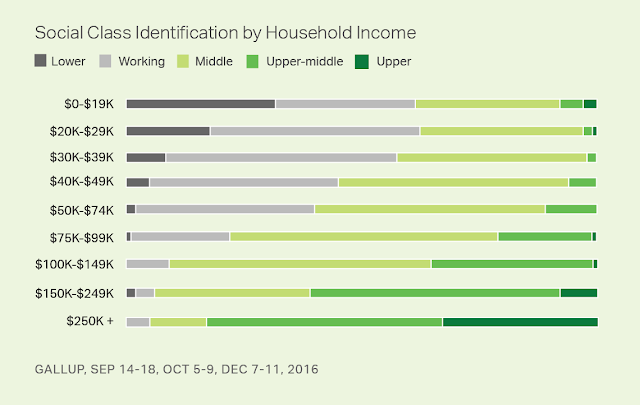 I just thought this from the Gallup Poll was interesting. Gallup says:

Gallup has, for a number of years, asked Americans to place themselves -- without any guidance -- into five social classes: upper, upper-middle, middle, working and lower. These five class labels are representative of the general approach used in popular language and by researchers. Gallup's last analysis showed that 3% of Americans identified themselves as upper class, 15% as upper-middle class, 43% as middle class, 30% as working class and 8% as lower class -- with noted changes in these self-categorizations over time. . . .

As we would expect, income is a powerful determinant of the social class into which people place themselves, as is, to a lesser degree, education. . . .

Americans' political party identification, ideology, marital status and gender make no difference in how they define themselves, once the other variables are controlled for.
Posted by Ted McLaughlin at 12:08 AM