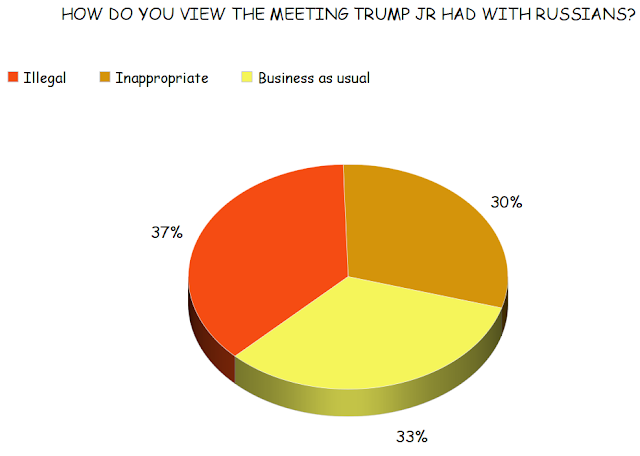 The chart above reflects the views of the public on Donald Trump Jr.'s meeting with Russians (who he believed represented the Russian government). About two-thirds (67%) believe that meeting was at least inappropriate -- and 37% believe it was probably illegal (violating U.S. election law).

But amazingly, a third of the public (33%) say it was just business as usual. I don't understand that. How could meeting with people representing a foreign government (which most people view as an enemy) to get information to help you win an American election be considered normal behavior? If you don't draw the line at colluding with a foreign government, then where do you draw the line? Is there anything (either unethical or illegal) that your candidate could do that you would not approve of?

"I could stand in the middle of 5th Avenue and shoot somebody and I wouldn't lose voters."

I think this 33% are the people he was talking about. There is literally nothing their "hero" could do that they couldn't justify in their own minds.

The chart above uses information in a new Harvard / Harris Poll -- done between July 19th and 24th of a random national sample of 2,032 registered voters. (No margin of error was given.)
Posted by Ted McLaughlin at 12:04 AM