Donald Trump - The Laziest And Most Corrupt President 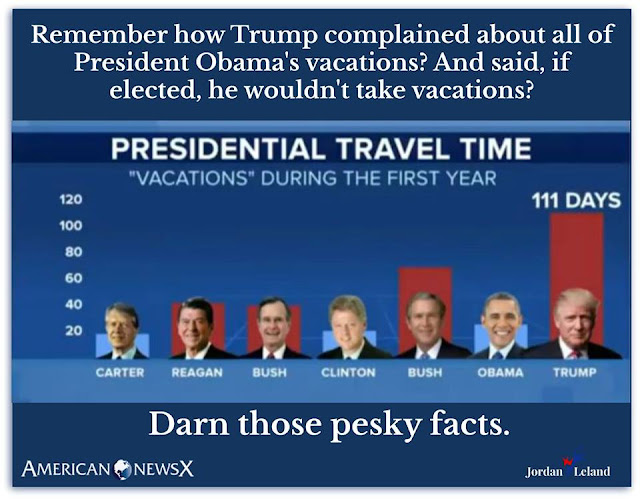 Donald Trump has not only taken more vacation days than any president in recent history, but he has spent all that vacation time at businesses that he owns -- charging the government exorbitant fees for him spending time there. He has turned both laziness and corruption into art forms.


President Donald Trump has spent nearly one-third of his time in office this year at one of the properties that either bear his name or that his family company owns, according to CNN's count.
Trump arrived in Florida on Friday for a prolonged visit at Mar-a-Lago, his private club that sits on this tony spit of land in southern Florida. The visit comes after Trump signed his signature tax legislation, putting an exclamation point on a tumultuous first year for the President.
With Trump comes a host of White House aides, an abundance of Secret Service agents and the ongoing controversy around the President boosting his private businesses by making frequent visits to properties that bear the Trump name.
Trump has so far spent 110 days as president at one of his properties, a fact that critics argue helps the businessman-turned-politician boost the bottom line at The Trump Organization. Trump transferred his business holdings to a trust run by his sons before taking office earlier this year, but stopped short of selling off his holdings.
To date, Trump has spent 39 days at Mar-a-Lago as President, including seven weekends in January, February and March, according to a CNN analysis. Though it has been his most controversial stomping grounds, it has not been his most frequent.
When the weather in South Florida turned hot and muggy over the summer, Trump ventured north to the familiar confines of his golf club in Bedminster, New Jersey. Trump spent a total of 40 days at the club, including a number of work filled days in August when Trump held meetings with cabinet officials and called world leaders.
Closer to the White House, Trump has visited Trump National Golf Club in Northern Virginia 23 times and Trump International Hotel just blocks down Pennsylvania Avenue five times so far during his presidency.
He spent several days at Trump Tower in New York this summer and also stopped by the Trump International Hotel Waikiki during a brief stop in Hawaii on his way to Asia in November.
Posted by Ted McLaughlin at 12:02 AM