Trump Has Abdicated U.S. Leadership In The World 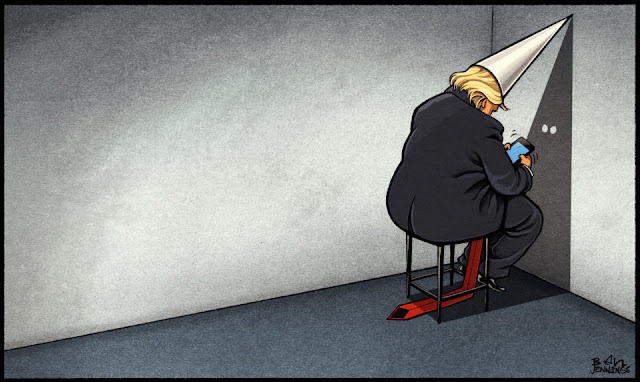 (Cartoon image of Trump is by Ben Jennings at i-news.)

Since World War II ended, the United States has been a leader in the world -- encouraging freedom, equality, and human rights. That is no longer true. Through his words, actions, and the way he has treated other countries and their leaders, Trump has abdicated that leadership position for the United States.

Here is just a small part of how Richard Haass (president of the Council on Foreign Relations) puts it in an article for The Atlantic:


When great powers fade, as they inevitably must, it’s normally for one of two reasons. Some powers exhaust themselves through overreach abroad, underinvestment at home, or a mixture of the two. This was the case for the Soviet Union. Other powers lose their privileged position with the emergence of new, stronger powers. This describes what happened with France and Great Britain in the case of Germany’s emergence after World War I and, more benignly, with the European powers and the rise of the United States during and after World War II.

To some extent America is facing a version of this—amid what Fareed Zakaria has dubbed “the rise of the rest”—with China’s ascendance the most significant development. But the United States has now introduced a third means by which a major power forfeits international advantage. It is abdication, the voluntary relinquishing of power and responsibility. It is brought about more by choice than by circumstances either at home or abroad.

Abdication is not isolationism. Donald Trump’s United States is not isolationist. He has authorized the use of limited military force against the Syrian government in a manner his predecessor rejected. U.S. military operations have gone a long way toward defeating ISIS in both Syria and Iraq. The Trump administration might employ force against Iran or North Korea, or both, and has pressed for and secured new international sanctions against the latter. It could well act (most likely unilaterally) in the economic realm, applying tariffs or sanctions as it sees fit against one or another trading partner. It is trying its hand (thus far without success) at mediating several disputes in the Middle East. The U.S. military effort in Afghanistan is to be extended and possibly augmented.

But abdication describes U.S. foreign policy all the same, as the United States is no longer taking the lead in maintaining alliances, or in building regional and global institutions that set the rules for how international relations are conducted. It is abdication from what has been a position of leadership in developing the rules and arrangements at the heart of any world order.

Under Donald Trump, however, U.S. foreign policy shows clear signs of significant departure. Support for alliances, embrace of free trade, concern over climate change, championing of democracy and human rights, American leadership per se—these and other fundamentals of American foreign policy have been questioned and, more than once, rejected. Trump is the first post–World War II American president to view the burdens of world leadership as outweighing the benefits. As a result, the United States has changed from the principal preserver of order to a principal disrupter.

This change has major implications. It will make it far more difficult to deal with the challenges posed by globalization, including climate change and nuclear proliferation, to regulate cyberspace on terms compatible with American interests, or to help relieve the plight of refugees on terms consistent with American values. It will make it more difficult to build frameworks that promote trade and investment and to ensure that the United States benefits from them. . . .

The net result was to give the United States a reputation for parochialism and unreliability, something inconsistent with its role as an ally and its hard-earned reputation for global leadership. . . .

Making matters worse were proposed budget cuts and unfilled posts at home and overseas that reduced the resources essential for an active diplomacy. It added up to what appeared to be a doctrine of withdrawal. . . .
The good news is that the costs of promoting global order tend to be less than the costs of not; the bad news is that this truth does not seem to be recognized by many Americans, including the 45th president. Abdication is as unwarranted as it is unwise. It is a basic fact of living in a global world that no country can insulate itself from much of what happens elsewhere. A foreign policy based on sovereignty alone will not provide security in a global, interconnected world. Or, to paraphrase the jargon of the day, America cannot be great at home in a world of disarray.
Posted by Ted McLaughlin at 12:02 AM