Putin And The American Far Right Are Natural Allies 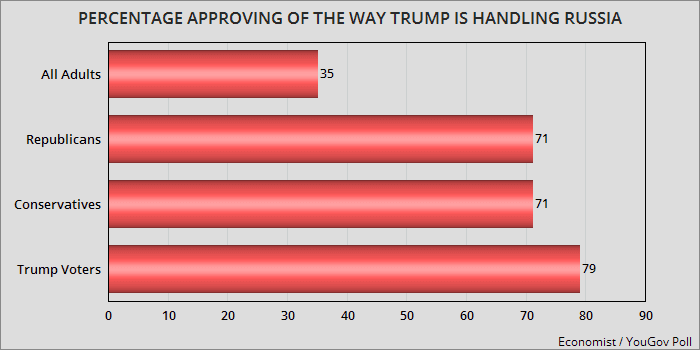 This chart reflects the results of the latest Economist / YouGov Poll -- done between July 22nd and 24th of a nationwide sample of 1,500 adults, with a 2.8 point margin of error.

It shows that Republicans, conservatives, and Trump voters (aka, the far right in the U.S.) actually approves of Trump's embracing of Vladimir Putin and treating him like a friend (ally) instead of the enemy that most Americans consider him to be.

This may surprise some of you. After all, these same people were the most rabid opponents of the Soviet Union and communism. One might expect them to understand that Russia is continuing it's aggressive policies. But they don't. Their opposition was ideological -- not realistic. Russia today is closer to a fascist society with a strongman leader that opposes democratic values -- and that is something the far right would love to see in this country. They also oppose democratic values, and that makes them natural allies for Putin.

Here is just a small part of an article on this subject by E.J. Dionne Jr. in The Washington Post:


The links among Vladimir Putin, President Trump, and segments of both the Republican Party and the American conservative movement seem bizarre. How can this be, given the Russian president’s KGB pedigree and a Cold War history during which antipathy toward the Soviet Union held the right together?
In truth, there is nothing illogical about the ideological collusion that is shaking our political system. If the old Soviet Union was the linchpin of the Communist International, Putin’s Russia is creating a new Reactionary International built around nationalism, a critique of modernity and a disdain for liberal democracy. Its central mission includes wrecking the Western alliance and the European Union by undermining a shared commitment to democratic values.
Putin is, first and foremost, an opportunist, so he is also happy to lend support to forces on the left when doing so advances his purposes in specific circumstances. But the dominant thrust of Putinism is toward the far right, because a nationalism rooted in Russian traditionalism cements his hold on power.
And the right in both Europe and the United States has responded. Long before Russia’s efforts to elect Trump in the 2016 election became a major public issue, Putin was currying favor with the American gun lobby, Christian conservatives and Republican politicians. . . .
Evangelical Christians  . . .  found common ground with Putin, a strong foe of LGBTQ rights, on the basis of “Moscow’s nationalist and ultraconservative push — led by the Russian Orthodox Church — to make the post-Soviet nation a bulwark of Christianity amid the increasing secularization of the West.”. . .
It’s important to recognize that something more is going on here than merely a generalized effort to disrupt American and European politics. Putin is pushing in a very particular direction, a lesson that should be absorbed across our philosophical divides.
The deepening ties between the Russian government and elements of the right should give pause to all conservatives whose first commitment is to democratic life. The willingness of traditionalists and gun fanatics to cultivate ties with a Russian dictator speaks of a profound alienation among many on the right from core Western values — the very values that most conservatives extol.
It should bother members of the GOP that progressive writer Brian Beutler was onto something when he observed recently that “in many ways Moscow understood Republicans better than Republicans understand themselves.” Putin saw that what he and parts of the right share is a hatred of liberalism.
And Republicans should bear in mind that disrupting Robert S. Mueller III’s probe serves Putin’s interests, not just Trump’s. . . .
It’s odd that self-styled opponents of globalization who shout slogans about putting their own countries “first” are actually putting their ideology first as they seek to globalize the far right. Friends of democracy everywhere need to stand in solidarity and resist this backward-looking drift to autocracy.
Posted by Ted McLaughlin at 12:02 AM