The Trump/Putin Bromance Will Continue (In Moscow) 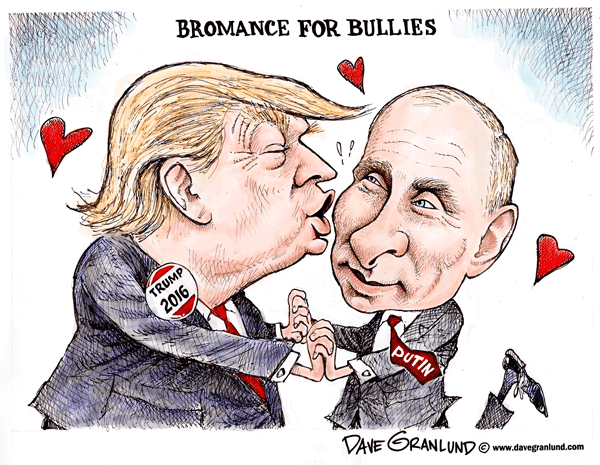 (Cartoon image is by Dave Granlund at davegranlund.com.)

It looked like Donald Trump's love affair with Vladimir Putin might have to be put on hold. Trump got nothing but misery from the press and Congress after inviting Putin to visit him in the White House, and had to delay the invitation. But Putin has come to the rescue by inviting Trump to visit him in Moscow. That might be better anyway, since those pesky journalists can be kept from interfering with they tryst there.

Here's how Mark Sumner at Daily Kos describes Trump's efforts to meet with his heartthrob and favorite dictator (and Putin's efforts to keep Trump dancing to Russia's tune):


In what can only be seen as a blatant display of his ability to make Donald Trump sit up and bark on command, Vladimir Putin started Friday with an invite for Trump to come to Moscow. And now it appears that Trump is going. According to the Associated Press, Trump is “open to visiting Moscow” and is just waiting on a “formal invitation” from Putin. The White House response does not say if Trump is also expecting a corsage or news on what kind of after-party activity Putin is planning.
To make it more obvious who is calling the tune, here’s a quick timeline:
16 July: Disastrous meeting in which Trump is patently subservient to Putin.
19 July: Trump invites Putin to the White House.
19 July to 24 July: Putin is busy washing his hair.
24 July: Kremlin suggests there are “other occasions” where the two could meet.
25 July: White House officially delays meeting Putin until 2019.
27 July: Putin invites Trump to Moscow.
27 July + a few minutes: Trump starts packing his bags.
Donald Trump appeared at a session on Friday morning to brag about quarterly numbers for the economy that were well below those produced in at least four quarters by Barack Obama, then retreated into the White House without taking questions. So no one was able to inquire if it makes his shoulders sore when Putin pulls this hard on his strings.
Posted by Ted McLaughlin at 12:02 AM