Democrats Find Themselves In An Uncomfortable Position 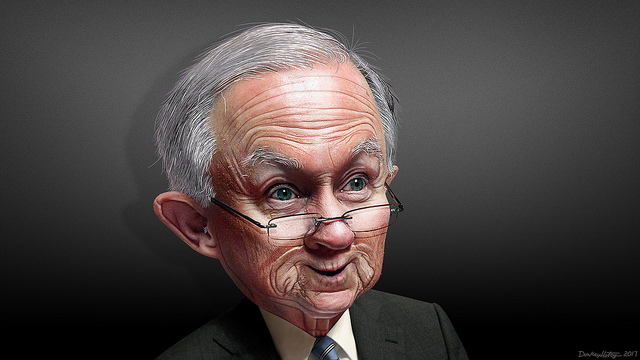 (This caricature of Jeff Sessions is by DonkeyHotey.)

Jefferson Beauregard Sessions III is the Attorney General of the United States. That is not something that makes Democrats very happy. Sessions is a racist, a misogynist, a homophobe, a religious bigot, and a xenophobe (who finds nothing wrong with caging immigrant children). And he seems to have no interest in enforcing voter laws, environmental laws, or supporting reform of our criminal justice system. In short, he's a terrible Attorney General.

Donald Trump wants to fire him. But not for any of the things I listed above. Trump actually likes those things about Sessions, because they mirror his own attitudes and policies. He wants to fire Sessions because Sessions followed Justice Department regulations and recused himself from any investigation of what happened in the 2016 election -- turning that investigation over to his deputy (who appointed Robert Mueller to head an investigation).

So far, Trump's lawyers and aides have talked him out of firing Sessions, but they believe he will do it anyway (although he may put it off until after the midterm elections).

This has put Democrats in a very uncomfortable position. They know Sessions is a terrible Attorney General, but they also know that as long as he stays in that office, the Mueller investigation is protected -- because Session's deputy has refused to stop or interfere in that investigation. This means they must protect the job of a man they despise (and truly believe is too incompetent and unqualified for the job he holds).

There may be a saving grace though. I think Trump has waited too long for firing Sessions to effectively stop the investigation. I think Mueller already has all (or most) of the information he needs, and currently is just dotting the i's and crossing the t's.

Also, if Democrats flip the House in the midterms, there is no way to stop Mueller's information from coming out. Even if a new Attorney General fired Mueller and blocked his report, House Democrats could just have him testify before Congress as to what he found.

Still, the best option is to protect Sessions from being fired. As bad as he is, any replacement appointed by Trump would likely be equally bad -- and as long as he's in office, the Mueller investigation continues. That doesn't make supporting that odious little man any easier though.
Posted by Ted McLaughlin at 12:08 AM