Trump Is Just Too Small For The Large Office He Holds 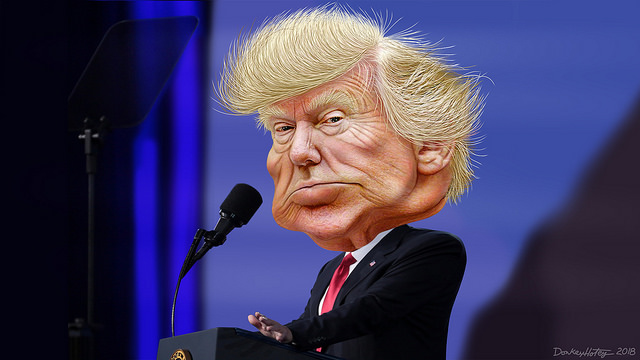 (This caricature of our inadequate and incompetent president is by DonkeyHotey.)

The following is just part of an excellent op-ed by Jennifer Rubin in The Washington Post:


A man such as Trump, who is so consumed with his own social media popularity, so willing to bludgeon companies (including media companies) that don’t pay homage, and so eager to fan divisions by pitting his followers against their fellow Americans, cannot “rise to the occasion,” especially when it means honoring someone else. He cannot function in a role that requires largeness of spirit, graciousness and good manners.
Trump’s antagonism toward liberal elites, the arm-chair psychiatrists tell us, is rooted in the Queens-born heir of a real estate mogul never being accepted by polite Manhattan society. He was crude and uncouth then just as he is crude and uncouth now. He sought the attention of the New York press, as he desperately does now (while excoriating the New York Times for “failing”). He could never earn the praise afforded to self-made men so he now feels compelled to lie about his achievements (the wall is being built!) to gain approval from his followers.
If he were not such a cruel, self-absorbed and amoral character, one might actually pity him. He frantically pleas for attention in a week in which the nation is absorbed with praise for one of the few Republicans who refused to grovel before him; it must infuriate him.
The ironies do not stop there. The man who spent most of his adult life trying to convince New Yorkers that he was richer and more successful than he was, now faces a probe, with evidence provided by his former lawyer Michael Cohen and the Trump Organization’s chief finance officer Allen Weisselberg, that threatens to expose his finances and business practices.
Trump’s fatally flawed character, temperament and intellect cripple his ability to do the simple tasks every predecessor of his was able to perform. These irreparable shortcomings land him in one humiliating predicament after another — and perhaps ultimately in the arms of prosecutors. Having attained the highest office in the land, he remains the pathetic grasper from Queens with his nose pressed up against the establishment window. It must drive him insane.
Posted by Ted McLaughlin at 12:02 AM