We Are Being Ruled By Trump's Enormous Gut 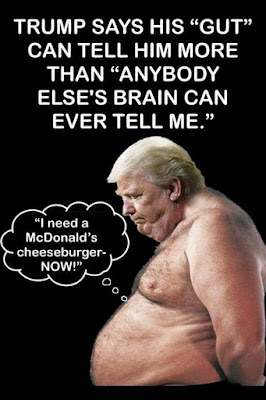 Have you wondered why Trump, claiming to be a genius, makes so many bad decisions? Well, he has told us. It seems that he prefers to listen to his enormous gut instead of his tiny brain. This shouldn't surprise us, since He made it clear in the campaign that size matters to him (remember his bragging about his "large" hands).

Here is part of what Dana Milbank has to say about Trump relying on his gut rather than his brain. He finds it both humorous and terrifying.


It should go down in history as the “I Have a Gut” speech.
President Trump, asked Tuesday by The Post’s Philip Rucker and Josh Dawsey about the Fed’s interest-rate hikes, gave a gastrointestinal response.
“They’re making a mistake,” he said, “because I have a gut, and my gut tells me more sometimes than anybody else’s brain can ever tell me.”
And what a prodigious and extraordinary gut he has!
Trump’s gut does amazing things. Last week, he said there was no need to prepare for trade negotiations with the Chinese president because “I know it better than anybody knows it, and my gut has always been right.”
He told the Daily Caller that his decisions about which candidates to endorse are based on “very much my gut instinct.” He told the Washington Examiner his 2016 campaign strategy came from multiple locations in his torso. “Yeah, gut,” he said, but also “from my heart.”
He said in 2011 that “my gut tells me” President Barack Obama’s birth certificate may have been forged. His gut also told him to do “The Apprentice.” He has over the years been a veritable fortune cookie on the primacy of gut: “Go with your gut. . . . You have to follow your gut. . . . Develop your gut instincts and act on them. . . . I’ve seen people that are super genius, but they don’t have that gut feeling.”
Obama, during a moment of adversity in his presidency, remarked: “I’ve got a pen, and I’ve got a phone.” Now, in a similar moment, Trump has an equally felicitous phrase: I’ve got a gut. And it thinks better than some brains! No wonder his primary physician before coming to the White House — the one who pronounced all Trump’s test results “positive” — was a gastroenterologist. A great gut needs great care.
There are, of course, other life forms that do their “thinking” with parts other than brains, but these tend to be sponges, scallops and the slime mold that re-created a map of the Tokyo subway system — not exactly a desirable cohort in which the president has placed himself. . . .
Bandy X. Lee, the Yale University psychiatrist who has sounded the alarm about the president’s mental functioning, thinks Trump’s preference for his gut is a rare moment of self-awareness. When Trump talks about his gut, she says, he’s really referring to his “primitive brain” — from which a rush of emotion is “overcoming him so he’s not able to access his actual intellect.”
“For people who are cognitively impaired, they use what we call our ‘gut,’ but it is really their primitive mind,” she says. “It takes over and can defeat those operations in the cognitive and rational realm.”
This appears to be what’s going on with climate change, for example, where Trump’s views are contradicted even by his own administration’s findings. Trump says he doesn’t believe his administration’s report despite being one of those with “very high levels of intelligence.”
“His thoughts are in conflict with his emotions,” Lee diagnoses, and “in order to eliminate that conflict and pain, he aligns himself with the primitive part of the psyche.”
Trump’s emotional gut, in other words, dominates the rational part of his brain.
Posted by Ted McLaughlin at 12:02 AM