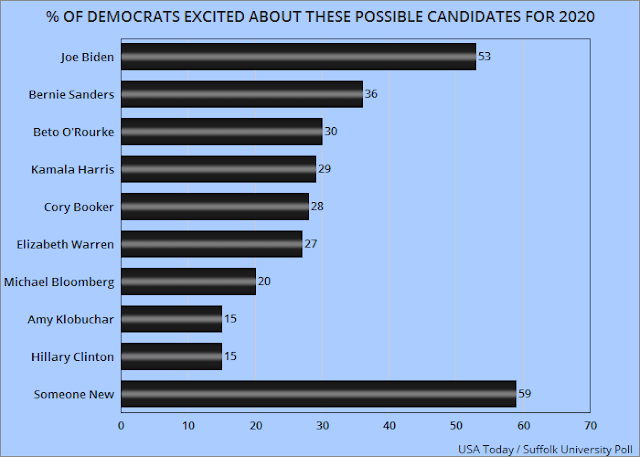 It's more than a year away from the first primaries/caucuses to pick a Democrat to oppose Trump in the 2020 election. What will determine who the Democrats choose? I don't think it's going to be policies they support or oppose. The main thing Democrats want is a candidate that can beat Trump.

The USA Today / Suffolk University Poll questioned a national sample of 689 Democrats and Independents between December 11th and 16th. The survey's margin of error was 3.7 points.

At this time, the candidate generating the most excitement is Joe Biden. About 53% said they would be excited about Biden entering the race. I think this is because, at least right now, most Democrats are comfortable that Biden could beat Trump.

They're not as sure about other candidates. But it is very early, and 59% said they would be excited about someone new. That means that they are willing to consider someone besides Biden -- if that candidate can convince them that he or she can beat Trump.
Posted by Ted McLaughlin at 12:06 AM