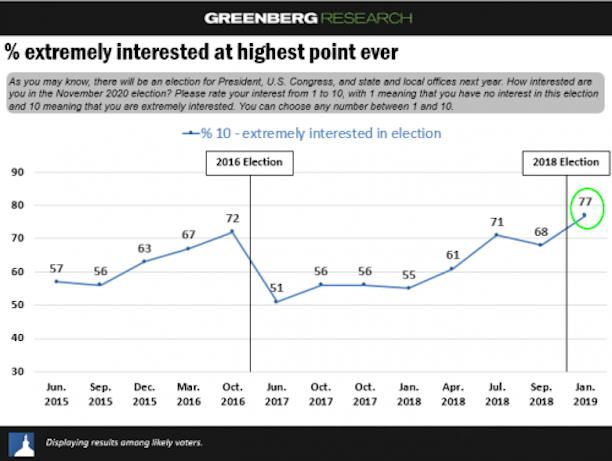 There's already a lot of talk in the mainstream media and on social media about the 2020 election. I've even posted quite a bit about it on this blog. Is it too early to be talking about the next election. Are American voters tired and want to focus about something else?

The answer seems to be a resounding NO! A new survey has been released by Democracy Corps / Greenberg Research. The survey questioned 1,000 registered voters nationwide between January 12th and 17th, and the survey had a 3.2 point margin of error. The chart above shows the results of the survey.

I think the interest is that high because Trump is still living in the people's White House. Democrats and Independents are wanting to change that (and there's a lot of sentiment about changing Congress also). Democrats/Independents want to seize the Senate, while Republicans want to retake the House. No one is very happy about the split government.
Posted by Ted McLaughlin at 12:08 AM