The "Nones" Are Larger Than Any U.S. Religious Group 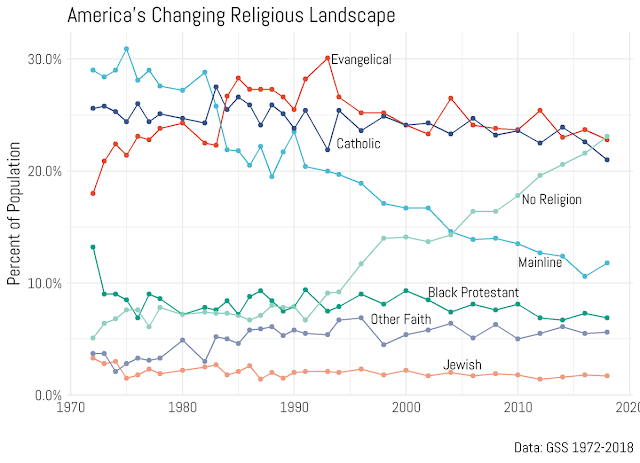 The group of people who claim to have no religion is now larger than any religious group in the United States -- slightly larger than evangelicals and catholics.


According to newly released General Social Survey data analyzed by Ryan P. Burge of Eastern Illinois University, Americans claiming “no religion” — sometimes referred to as “nones” because of how they answer the question “what is your religious tradition?” — now represent about 23.1 percent of the population, up from 21.6 percent in 2016. People claiming evangelicalism, by contrast, now represent 22.5 percent of Americans, a slight dip from 23.9 percent in 2016.
That makes the two groups statistically tied with Catholics (23 percent) as the largest religious — or nonreligious — groupings in the country.
“Nones have been on the march for a long time now,” Burge said. “It’s been a constant, steady increase for 20 years now. If the trend line kept up, we knew this was going to happen.”
Posted by Ted McLaughlin at 12:04 AM