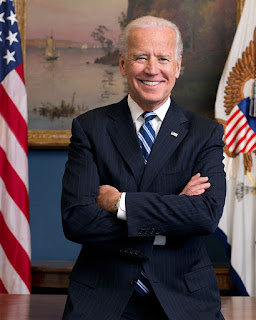 It comes as no surprise. In fact, I think most Democrats expected it. But on Thursday, Joe Biden made it official. He is running for the Democratic Party's presidential nomination in 2020.

Here is the message he sent to Democrats:

America is an idea. Based on a founding principle that all men are created equal.It's an idea that's stronger than any army, bigger than any ocean, and more powerful than any dictator.It gives hope to the most desperate people on Earth. It instills in every single person in this country the belief that no matter where they start in life, there's nothing they can’t achieve if they work at it.Today, that idea is under attack.We've got a president who assigns a moral equivalence between those spreading hate and those with the courage to stand against it.A president who, like most charlatans and demagogues throughout history, seeks only to aggrandize himself, to consolidate his own power -- by blaming the "other."If we give Donald Trump eight years in the White House, he will forever and fundamentally alter the character of this nation.I cannot stand by and watch that happen.Our core values, our very standing in the world, our democracy, and everything that makes us who we are is at stake.That's why I'm announcing my candidacy for President of the United States.

Biden's entry into the race raises the total of Democrats (and Independent) running for the nomination to 21 candidates. Here are the 21 candidates:

It will be interesting to see how long all these candidates stay in the race. I don't expect anyone to drop our before the June debates, but if some of these candidates can't start getting stronger support after those debates then we could start seeing some drop out. Any candidate that cannot get above 2% support by the end of this year is just wasting their time, because their candidacy is not viable.

The primaries/caucuses start in early February of 2020. How many will still be in the race at that time?
Posted by Ted McLaughlin at 12:06 AM