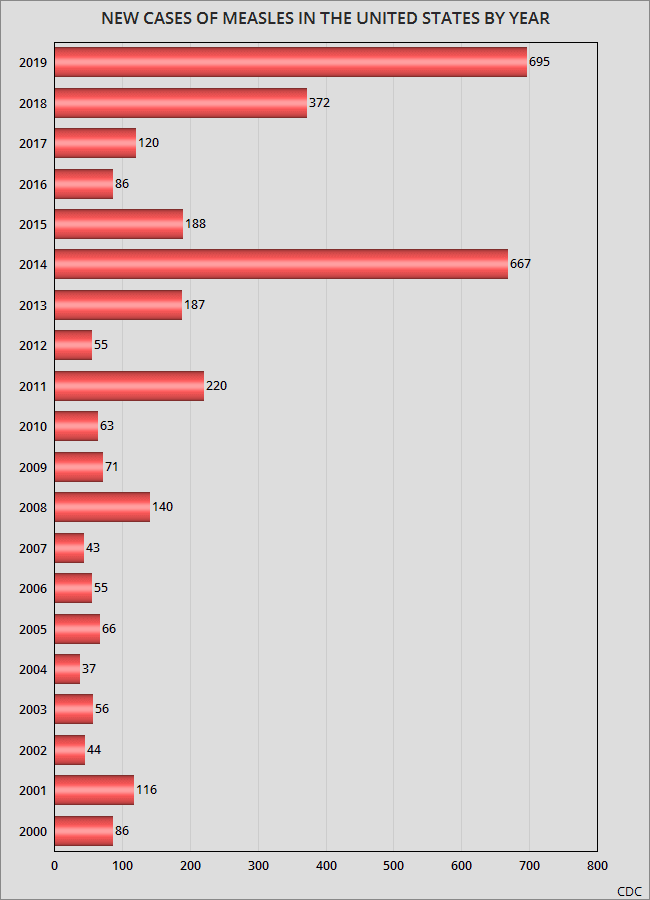 The number of new measles cases in the United States in 2019 is the highest of any year in this century -- and that's for only four months of this year. Imagine how high it will be by the end of the year!

We can thank the idiots in the anti-vaxxer movement for this for spreading lies about vaccines.


The Centers for Disease Control and Prevention reports 695 measles cases in 22 states.
"This is the greatest number of cases reported in the United States since measles was eliminated from this country in 2000," says a CDC statement issued late Wednesday. . . .
"The longer these outbreaks continue, the greater the chance measles will again get a sustained foothold in the United States," the CDC said.
Health and Human Services Secretary Alex Azar said in a statement that the rise in measles cases is "avoidable."
"Measles is not a harmless childhood illness, but a highly contagious, potentially life-threatening disease," he said. "We have the ability to safely protect our children and our communities. Vaccines are a safe, highly effective public health solution that can prevent this disease. The measles vaccines are among the most extensively studied medical products we have, and their safety has been firmly established over many years in some of the largest vaccine studies ever undertaken." . . .
The measles outbreaks were largely imported by unvaccinated travelers who were exposed to the disease in another country and then on their return to the U.S. exposed other unvaccinated people. If a community is highly vaccinated, then the outbreaks are minimal or don't happen at all.
"However, once measles is in an under-vaccinated community, it becomes difficult to control the spread of the disease," said the CDC. . . .
The states with reported cases of measles are Arizona, California, Colorado, Connecticut, Florida, Georgia, Illinois, Indiana, Iowa, Kentucky, Maryland, Massachusetts, Michigan, Missouri, Nevada, New Hampshire, New Jersey, New York, Oregon, Texas, Tennessee and Washington.
Posted by Ted McLaughlin at 12:02 AM