Trump Pursues His Goal Of Becoming A Dictator/King 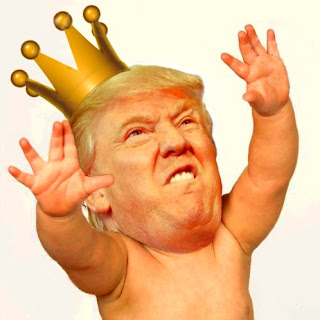 (This image of Trump as baby king is from thehypertexts.com.)

There is a school of thought that Donald Trump doesn't understand our system of divided government. I don't agree. I think he understands it, but just doesn't care. The Constitution is nothing more than a nuisance to him. It's an impediment to achieving his ultimate goal -- to establish an imperial presidency with himself as dictator/king.

It's because he has none of the tools necessary for the leader of a democracy. His only tools are lying, cheating, and bullying. Those are the tools of a tyrant, and they are not suited for a democracy.

He tried using those tools to quell the Mueller investigation, and he failed. Now he is doubling down on them to protect himself from congressional investigation. He is refusing to cooperate with Congress by blocking the release of any and all records, and refusing to let any of the members of his administration testify before Congress.

Here is just part of how Robert Reich describes Trump's latest tyrannical moves in The Guardian:

“We’re fighting all the subpoenas,” says the person who is supposed to be chief executive of the United States government.

In other words, there is to be no congressional oversight of this administration: no questioning officials who played a role in putting a citizenship question on the 2020 census. No questioning a former White House counsel about the Mueller report.

No presidential tax returns to the ways and means committee, even though a 1920s law specifically authorizes the committee to get them.

Such a blanket edict fits a dictator of a banana republic, not the president of a constitutional republic founded on separation of powers.

If Congress cannot get information about the executive branch, there is no longer any separation of powers, as sanctified in the US constitution.

There is only one power – the power of the president to rule as he wishes.

Which is what Donald Trump has sought all along.

Trump’s contempt for the inherent power of Congress cannot stand. It is the most dictatorial move he has initiated since becoming president.

Congress has a constitutional duty to respond forcefully, using its own inherent power of contempt.
Posted by Ted McLaughlin at 12:02 AM