It Is NOT Unconstitutional To Indict A Sitting President 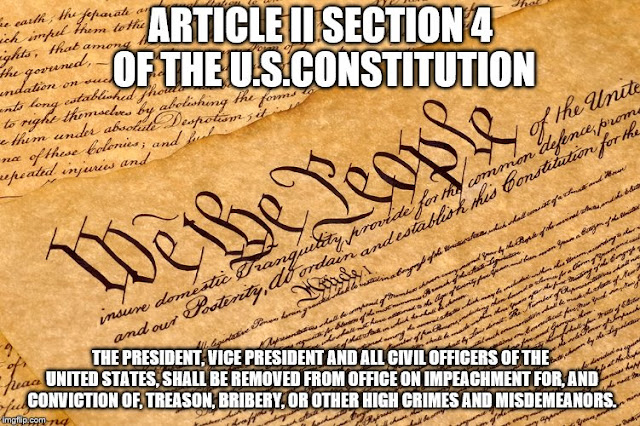 Attorney General William Barr (aka "Whitewash Willie) would like to have his cake and eat it too. He has said that if Mueller had found Trump obstructed justice then he should have charged him with that. But he also holds with the Justice Department opinion that says it is unconstitutional to indict a sitting president, because the only remedy for a sitting president is impeachment and removal from office.

The impeachment clause of the Constitution (Article 2, Section 4) is in the image above. It is short and to the point, and simple says how the president can be removed for office. It does NOT say the president is above the law and cannot be indicted. In fact, that is nowhere in the Constitution. It exists only in the minds of weak Attorney Generals (mostly Republicans).

Why is the impeachment clause in the Constitution? It's because the Founding Fathers knew they must include a way to remove a president from office who had committed criminal behavior. It was never meant to substitute for a criminal procedure (indictment and trial). It was only a way to get a criminal out of the presidency. Without it, a president could commit a gross criminal act and remain in office.