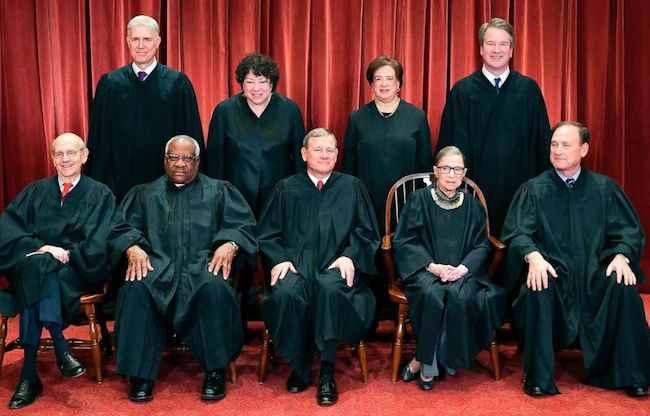 It looks like Chief Justice John Roberts really is going to be the swing vote on the current Supreme Court. On Thursday, He joined the four liberal justices (Ginsburg, Breyer, Kagan, Sotomayor) in rejecting the Trump administration's desire to put a citizenship question on the official 2020 census form. The vote was 5 to 4, with the court's conservatives (Kavanaugh, Alito, Thomas, Gorsuch) voting to allow the question to be included.

The court said the government might have the right to include the citizenship question, but had failed to provide adequate justification for it. Since there are only a few weeks before the printing of the census forms must begin, it is unlikely that the justification could be provided in time.

Here is how Pete Williams of NBC News reported the court's decision:


The Supreme Court ruled Thursday that the Trump administration cannot include a question about citizenship on the 2020 census form that goes to every U.S. household, giving a win to mostly Democratic populous states that said the question would discourage legal and illegal immigrants from responding and make the population count less accurate.
The court was deeply fractured on the issue, but on the section that essentially eliminated the citizenship question, the vote was 5-4, with Chief Justice John Roberts joining the four-member liberal wing of the court.
The court's majority said the government has the right to ask a citizenship question, but that it needs to properly justify changing the long-standing practice of the Census Bureau. The Trump administration's justification was "contrived," Roberts wrote, and did not appear to be the genuine reason for the change, possibly implying that the real reason was political.
The decision makes it highly unlikely that the Commerce Department will now have time to justify the question and make it part of the census before the forms have to be printed in only a few weeks.
The ruling was a setback for the Trump administration's tough position on immigration. It was also a surprise, because it appeared in April when the case was argued that the court's five-member conservative majority was prepared to rule that Commerce Secretary Wilbur Ross acted within his authority to add the question.
A census is required every 10 years by the Constitution, and the results determine the size of each state's congressional delegation. The data is also used to calculate a local government's share of funds under many federal programs.
A total of 18 states, several of the nation's largest cities and immigrant rights groups sued to block the question, saying it would make immigrants reluctant to respond to the census mailer. As a result, states with large immigrant communities could lose seats in Congress and suffer cuts in government aid programs, their lawsuit said.
Citizenship questions were asked during every census between 1820 and 1950. But from 1960 on, the government sent households a short form that contained only a few questions and did not inquire about citizenship. Both the Census Bureau and the groups behind the lawsuit agreed that the question will reduce the census response rate, especially in immigrant communities. By one government estimate, as many as 6.5 million people might not be counted.
Posted by Ted McLaughlin at 12:02 AM