Is It Time For Medicare-For-All Or A Public Option? 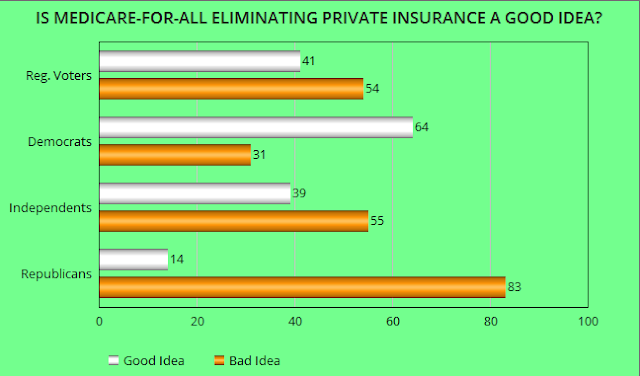 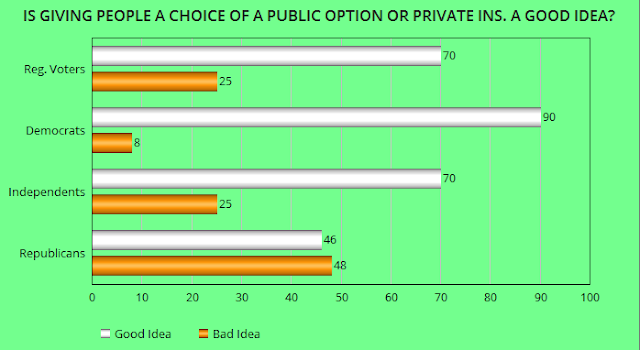 I personally believe this country, hopefully not too far down the road, will finally wind up with a single-payer, government-run health insurance system (like a Medicare-For-All system). It the only program that would solve the problems with our health care system -- especially cost and coverage for everyone.

But I'm also realistic, and I understand the majority of Americans are not yet ready to completely do away with private insurance -- especially those getting insurance through their employer. And until a significant majority wants Medicare-For-All, it's not going to happen. Currently a majority of registered voters (54%) and Independents (55%) are opposed to Medicare-For-All, and until those groups are on board, it's useless to try and pass such a program.

Progressives should be exasperated though. The public is on board with passing a public option, and giving Americans a choice of the government program or private insurance. And that's halfway to our goal. It probably wouldn't be totally effective in controlling costs, but it could be designed to cover all Americans with health insurance.

If this public option is designed properly, it will become as popular as Medicare currently is. And as many see they can save money with the public option (including employers), the nation will move toward a true Medicare-For-All.

American voters are notoriously moderate for the most part. They want progress, but they want it in steps (so they can be sure it works before going further). Creating a public option for insurance is a step the country is ready for, so that is what should be done right now. It just makes sense.

The charts above reflect the results of a recent NPR / PBS NewsHour / Marist Poll -- done between July 15th and 17th of a national sample of 1,346 registered voters. The margin of error for that sample is 3 points (and for the sub-groups is about 5.4 points).
Posted by Ted McLaughlin at 12:06 AM