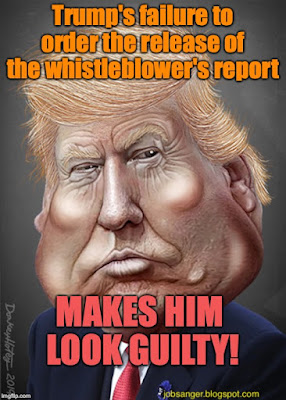 The whistleblower story about Trump's call to a foreign leader is growing larger every day. It now looks like Trump may well have committed impeachable new crimes -- like extortion (using withholding of congressional funds to force a foreign leader into doing something that would personally benefit Trump) or campaign finance violation (seeking help with his 2020 campaign from a foreign leader).

And in the case of the latter, Trump can't claim ignorance of the law this time (like he and his family did when the Russians helped him in 2016).

Trump's minions are breaking the law by refusing to release the claim, but Trump could order the release of the claim to Congress anytime he wants. If it doesn't show him committing a crime, why won't he order that release. Failure to do that makes him look guilty (as though the whistleblower's claim is true and Trump committed a crime).

Trump's enormous ego, and his belief that he is above the law, may well have gotten him in serious trouble this time. If the claim is true, and his failure to order it's release makes it look that way, then even Speaker Pelosi may have to admit that the time for impeachment is NOW!
Posted by Ted McLaughlin at 12:06 AM