What Did Trump Promise A Foreign Leader - And Why Is He Trying To Hide It From Congress? 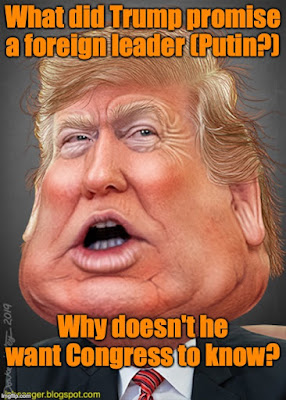 You have probably heard about the latest Trump administration scandal. On a call to a foreign leader (likely Putin), Trump made a promise. That promise troubled an official in the intelligence community so much that he properly filed a whistleblower report.

Intelligence Community Inspector General Michael Atkinson found the report determined the complaint was credible and of "urgent concern" (which would require its reporting to Congress). He forwarded the complaint to Joseph Maguire (acting director of national intelligence).

In other words, he's breaking the law -- probably on orders from the White House.

What did Trump promise that foreign leader? Would it be damaging to this country or our allies? Or just embarrassing to Trump?

This is just one more example of Trump flouting the law, and refusing to honor the Constitution's division of power. He thinks he can do whatever he wants, and refuse any oversight from Congress when questioned. He's not acting like a president. He's trying to rule like a dictator!

Here's what the editorial board of The Washington Post says:

A NEW dispute has arisen between Congress and the Trump administration over a whistleblower complaint from within the intelligence community. By law, it should be shared with Congress, but the administration is refusing to do so. House Intelligence Committee Chairman Adam B. Schiff (D-Calif.) is entirely correct to insist that the administration follow the law. He should pursue the matter until it does.
According to Mr. Schiff, on Aug. 12 a whistleblower within the intelligence community filed a complaint that met the legal description of a disclosure involving a “serious or flagrant problem, abuse, violation of law or Executive order, or deficiency” related to funding, administration or operation of classified intelligence activity. Neither the subject of the complaint nor the whistleblower’s agency has been disclosed, but the complaint was deemed of “urgent concern” by the intelligence community’s inspector general, Michael Atkinson.
Mr. Atkinson sent it to Joseph Maguire, acting director of national intelligence. According to the congressman, a preliminary review by the inspector general determined that “there are reasonable grounds to believe” the information “is credible.” So far, this is how the system is supposed to work under the Intelligence Community Whistleblower Protection Act of 1998 and subsequent presidential directives and laws. Mr. Maguire, the law says, “shall” forward such a whistleblower complaint to the congressional intelligence committees within seven days.
So far, that hasn’t happened. Mr. Schiff says the intelligence community’s explanation to him is that the complaint “concerns conduct by someone outside of the Intelligence Community” involving “confidential and potentially privileged communications.” The congressman says he thinks the intelligence community may be covering up misconduct involving the White House or the president. We don’t know. But Mr. Schiff says this is the first time he’s aware of that a director of national intelligence has overruled the inspector general and concealed a whistleblower complaint, for which the director has “neither the legal authority nor the discretion.” And that is suspicious. Mr. Schiff has issued a subpoena and demanded action by Tuesday, or appearance at a public hearing Thursday.
Mr. Trump has made plain his distaste for congressional oversight. Elsewhere, he’s resisting disclosure of his tax returns to the House Ways and Means Committee, although the law in that case also is straightforward. Oversight is a vital function of Congress, one that’s not always performed as strenuously as it should be. At the same time, the Supreme Court has ruled that it can’t lead to boundless inquisitions, or what Mr. Trump would call witch hunts. The court said the investigating must be limited to “a legitimate task of the Congress.”
In the case of the intelligence-community whistleblower, this clearly falls under the definition of a legitimate task of Congress. Someone inside the intelligence community decided to follow the rules and filed this complaint for a reason. Neither Mr. Maguire nor Mr. Trump should be able to conceal such information. They should respect and uphold the law, not contravene it.
Posted by Ted McLaughlin at 12:02 AM