Health Care Is An Important Issue For 2020 (Here's Why) 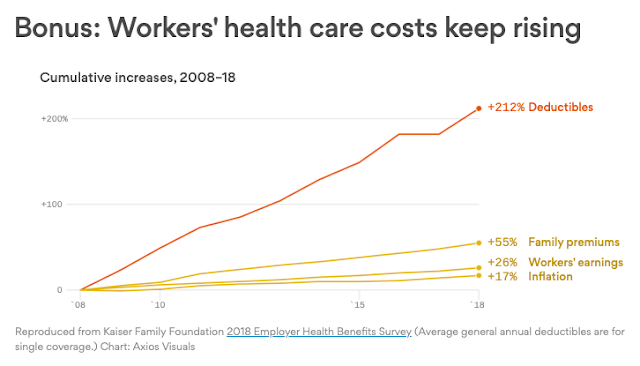 Health care is shaping up to be an important issue in next year's election -- maybe the most important issue. It's not just because millions of Americans are unable to afford health insurance (and that number is growing under Trump), but even those with health insurance are being squeezed. The cost of both insurance and medical care/drugs are rising exorbitantly, while life expectancy in the U.S. is dropping.

The chart above and the articles below are from Axios.com:

Health insurance through an employer — the way most Americans get it — costs an annual average of almost $23,000 to cover a family. That's enough to buy a new Volkswagen every year.

Here's where the leading Democrats stand on how to fix our health system:


The way Democratic presidential candidates talk about "Medicare for All" has shifted and sharpened over the course of the campaign — and Medicare for All has gotten less popular in the process.
When Sen. Bernie Sanders introduced his Medicare for All bill in 2017, all of his likely 2020 rivals in the Senate signed on as cosponsors, and many Democrats treated Medicare for All as a catch-all or a loosely defined goal.
What they're saying:
Posted by Ted McLaughlin at 12:02 AM