We Must Take Control Of Government Back From The Rich 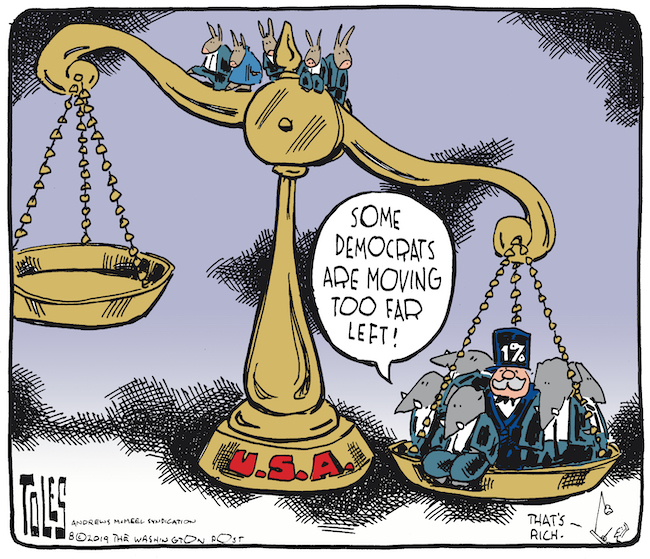 The cartoon above is by Tom Toles in The Washington Post. It describes the economic situation in this country pretty well. The rich, with the help of Republicans, control our government. And they have been able to tilt the economic playing field to their advantage. Democrats are trying to change those economic rules to make them fairer for all American citizens -- but that has resulted in charges that they are too far to the left (socialists). It's not true. None of the major Democratic candidates are truly socialists -- not even Bernie Sanders or Elizabeth Warren. They are all capitalists, but think that capitalism needs rules to prevent the abuse of workers and consumers.

The first thing you need to know about the very rich is that they are, politically, different from you and me. Don’t be fooled by the handful of prominent liberal or liberal-ish billionaires; systematic studies of the politics of the ultrawealthy show that they are very conservative, obsessed with tax cuts, opposed to environmental and financial regulation, eager to cut social programs.

The second thing you need to know is that the rich often get what they want, even when most of the public want the opposite. For example, a vast majority of voters — including a majority of self-identified Republicans — believe that corporations pay too little in taxes. Yet the signature domestic policy of the Trump administration was a huge corporate tax cut. . . .

Why do a small number of rich people exert so much influence in what is supposed to be a democracy? Campaign contributions are only part of the story. Equally if not more important is the network of billionaire-financed think tanks, lobbying groups and so on that shapes public discourse. And then there’s the revolving door: It’s depressingly normal for former officials from both parties to take jobs with big banks, corporations and consulting firms, and the prospect of such employment can’t help but influence policy while they’re still in office.

Last but not least, media coverage of policy issues all too often seems to reflect the views of the wealthy. Take, for example, the issue of policies to combat unemployment.

Unemployment in the United States is currently at a historical low, just 3.5 percent — and we’re achieving that low unemployment without any sign of runaway inflation, which tells us that we were capable of this kind of performance all along. Remember when people like Jamie Dimon, the chief executive of JPMorgan Chase, told us that high unemployment was inevitable because of a “skills gap”? They were wrong.

But it took us a very long time to get here, because unemploymentreceded only slowly from its post-crisis peak. The average unemployment rate over the past decade was 6.3 percent, which translates into millions of person-years of gratuitous joblessness.

Why didn’t we recover faster? The most important reason was fiscal austerity — spending cuts, supposedly to reduce the budget deficit, that exerted a steady drag on the economy from 2010 onward. But who was obsessed with budget deficits? Voters in general weren’t — but surveys indicate that even when the unemployment rate was above 8 percent the wealthy considered budget deficits a bigger problem than lack of jobs.

And the news media echoed these priorities, treating them not as the preferences of one small group of voters but as the only responsible position. As Vox’s Ezra Klein noted at the time, when it came to budget deficits it seemed that “the usual rules of reportorial neutrality” didn’t apply; reporters openly advocated policy views that were at best controversial, not widely shared by the general public and, we now know, substantively wrong.

But they were the policy views of the wealthy. And when it comes to treatment of differing policy views, the media often treats some Americans as more equal than others. . . .

You may disagree with progressive ideas coming from Elizabeth Warren or Bernie Sanders, which is fine. But the news media owes the public a serious discussion of these ideas, not dismissal shaped by a combination of reflexive “centrist bias” and the conscious or unconscious assumption that any policy rich people dislike must be irresponsible.

And when candidates talk about the excessive influence of the wealthy, that subject also deserves serious discussion, not the cheap shots we’ve been seeing lately. I know that this kind of discussion makes many journalists uncomfortable. That’s exactly why we need to have it.
Posted by Ted McLaughlin at 12:02 AM