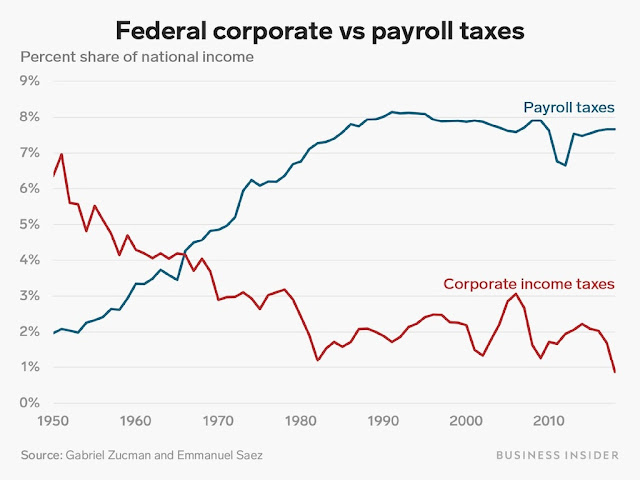 The chart above, from Business Insider, shows how Republican economic policy has benefitted corporations while hurting workers. In 1950 (a time of substantial growth and a growing middle class), workers paid only about 2% of federal tax income while corporations paid about 7%.

Thanks to Republican policies favoring the rich, that has now flipped. Workers now pay 7.8% of national income, while corporations pay only 0.9%.

Republicans said the money saved by corporations would trickle=down to the rest of America. That has not happened. Instead of paying workers more, the corporations are just buying their own stock (thus artificially inflating the value of that stock, allowing executives and stockholders to fatten their bank accounts).

Corporations are not paying their fair share of taxes, and too many high-profit corporations pay no taxes at all. We must fix this, and return to an economic policy fair to all Americans. This will not happen until the Republicans are voted out of power.
Posted by Ted McLaughlin at 12:04 AM