If GOP Approves Trump Nominee - Dems Have One Option 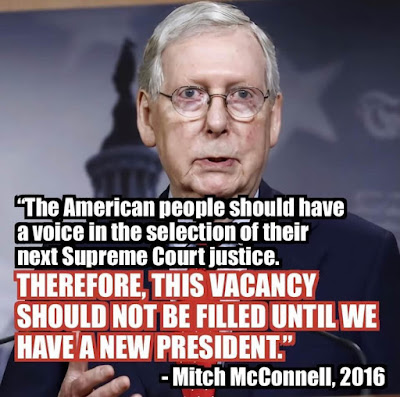 The image to the right shows Mitch McConnell's statement in 2016, as he refused to even consider allowing a vote on President Obama's Supreme Court pick (Merrick Garland). He wasn't the only one. Republican senators all fell in line, and stated that they would do the same thing if a Republican president was picking a justice in an impending election.

Well now, with less than two months before a presidential election, Donald Trump has said he will nominate a justice to replace Ruth Bader Ginsburg (who died last Friday). Will the Republicans keep their promise?

Not a chance! Ginsburg had been dead only a few hours when McConnell said a Trump pick would get a vote in the Senate -- and other Republicans are following McConnell's lead and breaking their promise. They will try to put another right-winger on the Court before January (when it is likely a new president will be inaugurated).

Honesty, morality, and ethnics mean nothing to these Senate Republicans. They only care about trying to hold on to power, and assuring a court to make sure rich white men and corporations are protected.

I doubt they'll do it before the election, since some GOP senators would be hard pressed to explain that to the voters. But in the two months after the election (and before the new Congress is seated), they will have their chance -- and they will seat a new Trump justice (giving right-wingers a 6 to 3 advantage on the court).

Republicans don't care about women's rights (including Roe vs. Wade), minority rights, voting rights, or the environment. A 6 to 3 majority of right-wingers on the court would endanger all of those. It could set this country back 50 years -- and insure the changes last for a generation.

What are Democrats to do? They may be left with only one option. Here's part of how Jill Filipovic explains that Democratic option in The Washington Post:

Senate Majority Leader Mitch McConnell, who blocked President Obama from filling a Supreme Court seat vacated 11 months before inauguration, says he will permit President Trump to fill one vacated just four months before inauguration, and less than two months before the election. McConnell announced hours after news of Ginsburg’s death became public that he would attempt to push a nominee through to the bench. “President Trump’s nominee will receive a vote on the floor of the United States Senate,” he said.

Democrats have only one play here: If Trump and McConnell jam an appointee through, it is not enough for Democrats to raise hell about the hypocrisy, the duplicity and the Republican refusal to play by McConnell’s own rules. It is not enough to target every Republican senator who goes along. It is not enough to have voters bombard their Republican senator’s office with phone calls and protests. Because those things have been happening for four years, and none of them have persuaded the GOP to put the stability of the country or the obligations of office ahead of that party’s thirst for power.

So Democrats should threaten to pack the court. And, if McConnell pushes through a new justice and then Joe Biden wins, they should follow through. . . .

But this is also a question of fundamental fairness and democratic norms. In order for a democracy to function, people have to play by the same rules. McConnell has made up the rules as he goes along, constraining Democrats and empowering his own party. He has shown, time and again, that preserving American democracy is not the goal; power is. We saw this when he thwarted Obama’s nomination of Merrick Garland. We saw it when he blocked any real impeachment trial and refused to call witnesses who might incriminate Trump.

Democrats need to realize that they’re up against a mendacious bully who is never going to follow even the rules he sets out. “Court-packing” is a loaded term, and if they’re smart, Democrats will find a more palatable one. But it’s a defensible and evenhanded move to assert that, if McConnell steals another Supreme Court seat (just weeks before a national election), then Democrats will consider a presidential victory a mandate from voters to expand the number of seats on the Supreme Court.

This is not unprecedented. The number of justices has not been static at nine; it’s changed six times, from as few as six to as many as ten. All it takes is for Congress to pass an act, and for the president to sign it. If a Biden victory comes with a Democratic congressional majority, expanding the number of Supreme Court justices isn’t all that hard to do. . . .

With an election looming, Democrats can give voters a say. If they vow to expand the court, then Americans can cast their ballots with that in mind. Key to the message should be that McConnell and Senate Republicans have so repeatedly broken the rules, rigged the game and stolen victories that it’s become impossible to play on neutral turf. As Murkowski put it, fair is fair.

It’s a shame we’re here. But to restore a democracy that has been battered, bruised and robbed blind by the president and his party, Democrats will need to fight harder. If Republicans steal this seat, the only reasonable response is to change the number of judges on the bench.