Our Tax System Is Broken - Trump's Returns Prove It 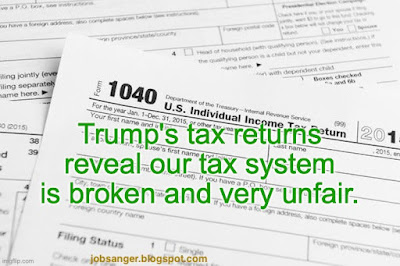 I wasn't too surprised to learn that Donald Trump paid no taxes in 10 of the last 15 years, and in two more of those years paid only $750 (less than any middle or working class person must pay).

Our tax system is broken, and has been since the Republicans gained enough power to institute their economic policy a few decades ago. They believe the rich should not have to pay as much in taxes as the rest of us.

They tell us that by allowing the rich to keep most of their money, through an unfair tax system, they will share that extra money with the rest of us. Of course that has never happened. The rich just fatten their own bank accounts, and nothing "trickles" down.

Our income tax system was originally designed to be progressive. It was intended to be that those who made the most should pay the most -- and that worked well for many years, creating a vibrant and growing middle class. That system benefitted everyone, including the poor and disadvantaged (who benefitted from government programs paid for through those taxes).

Sadly, that is no longer true (as Trump's tax returns have shown us). We must fix our broken system.

Here is a part of what the editorial board of The New York Times has to say about this:

The portrait of a man who earned hundreds of millions of dollars, lived a life of comic excess and yet, in many years, paid nothing in federal income taxes is an indictment of the federal income tax system. It illustrates the profound inequities of the tax code and the shambolic state of enforcement.

The government has sharply reduced the share of income that it collects in taxes from the wealthiest Americans. One recent study found that the 400 wealthiest households paid 70 percent of their total income in federal, state and local taxes in 1950, 47 percent in 1980 and 23 percent in 2018. The cuts in tax rates have come mostly at the federal level.

The government allows income to be sheltered from taxation for hundreds of different reasons, but real estate investors have long enjoyed a particularly sweet set of loopholes. A homeowner can write off the interest payments on a mortgage loan, but the owners of commercial buildings get a host of other benefits, too. It’s relatively easy for real estate investors to use past losses to offset income, to defer income and to avoid reporting some kinds of income. Best of all, the law lets investors claim a building is depreciating in value — a theoretical loss of money — even as the actual value increases. . . .

Moreover, the formidable complexity of the tax code makes it difficult to tell when wealthy taxpayers have crossed legal lines. For the rich, taxation often becomes a kind of structured negotiation between the taxpayer’s experts and the government’s experts.

It’s not a fair fight: The rich keep getting richer, while the Internal Revenue Service keeps getting smaller. Republicans in Congress have slashed funding for the I.R.S., stripping the agency of expertise, resources and authority. The number of I.R.S. auditors has fallen by one-third since 2010. The government employs fewer people to chase deadbeats than at any time since the 1950s.

The share of all tax returns subject to an audit declined by 46 percent from 2010 to 2018, according to the Congressional Budget Office. Astonishingly, the decline was even steeper for millionaires — the audit rate fell 61 percent over the same period. . . .

On current trends, the federal government will fail to collect $7.5 trillion in taxes over the next decade — about 15 percent of the total amount owed.

Cracking down on rich tax cheats is law enforcement. It is a basic function of government to ensure that people are playing by the rules. Tax cheating is not a victimless crime. Every dollar hidden from the government is that much less money to spend on education, roads and research. The rich are benefiting at the expense of everyone else. . . .

Congress should restore every penny of funding stripped from the I.R.S. since 2010 — plus whatever is necessary for the agency to perform its critical work.

Paying taxes is a civic duty, and the government needs the money. Most Americans try to pay what they owe, even if they wish they owed less, and they take comfort in the assumption that most of their neighbors are conducting themselves in the same way.