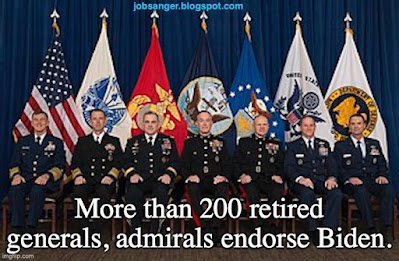 Traditionally, high-ranking officers in the U.S. Military stay out of politics -- at least publicly. Even after retirement, they avoid mixing in politics.

But these are dangerous times, and retired military officers know it. They know Trump has been a disaster for the country and its military, and over 200 generals and admirals now feel it is their duty to speak out.

They all signed a letter endorsing Joe Biden for president in the coming election.

Here is how Courtney Cube and Dan De Luce report it at NBC News:

More than 200 retired generals and admirals endorsed Joe Biden for president in a letter published Thursday, saying he had the character and judgment to serve as commander-in-chief instead of President Donald Trump, who has failed "to meet challenges large or small."

Some of the officers who signed the letter supporting Biden had retired only in the past few years, including Air Force Gen. Paul Selva, who served as vice chairman of the Joint Chiefs of Staff under Trump before he retired in August 2019; Vice Adm. Gardner Howe, a Navy SEAL leader who also retired last year; and retired Adm. Paul Zukunft, who oversaw the Coast Guard until 2018.

The list of signatories featured 22 retired four-star military officers, among them Navy Adm. Samuel Locklear, who oversaw all U.S. forces in the Pacific from 2012 to 2015, and Adm. Harry Ulrich, who commanded U.S. naval forces in Europe during President George W. Bush's administration.

The retired top brass signed the letter backing Biden along with nearly 300 other former national security officials and diplomats. William Webster, the former director of the CIA and the FBI, was among the signatories, along with five former defense secretaries: William Perry, William Cohen, Chuck Hagel, Leon Panetta and Ash Carter. . . .

By law, military service members must remain apolitical while in uniform, but most senior officers stay out of the political arena even after they hang up their uniforms. Although the number of retired senior officers wading into politics has steadily increased over the past two decades, Thursday's letter was notable for the sheer number of top brass from every branch of the military who chose to endorse Biden.

"We are Republicans, Democrats, and Independents. We love our country. Unfortunately, we also fear for it," they wrote.