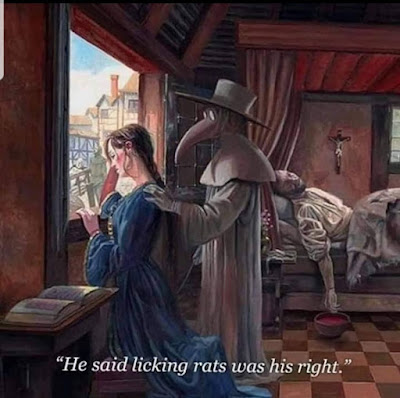 The image to the right was found on Facebook. It makes just as much sense as refusing to wear a mask in the midst of a pandemic.

Some say refusing to wear a mask is a cultural thing. That makes no sense. Wearing or not wearing a mask has nothing to do with our culture.

Others say it is their right to refuse to wear a mask. That's also ridiculous. No one has a right to endanger others -- and that is exactly what refusing to wear a mask does.

The truth is that refusing to wear a mask is nothing more than a political statement (and a dangerous one at that) -- it's to show the world your loyalty to Trump.

So how can anti-masker agitation still be a major factor impeding America’s ability to cope with this pandemic?

You sometimes see people suggesting that wearing face masks is somehow inconsistent with America’s individualistic culture. And if that were true it would be a condemnation of that culture. After all, there’s something very wrong with any definition of freedom that includes the right to gratuitously expose other people to the risk of disease and death — which is what refusing to wear a mask in a pandemic amounts to.

But I don’t believe that this is a deep-seated cultural phenomenon. Some might dismiss the widespread compliance I see all around me by saying that New York doesn’t represent Real America™. But even leaving aside the fact that 21st-century America is mainly urban — almost half of Americans live in metropolitan areas with more than one million people — would they say the same about Arizona?

And bear in mind that as long as I can remember, many shops and restaurants have had signs on their doors proclaiming “no shirt, no shoes, no service.” How many of these establishments have been stormed by mobs of bare-chested protesters?

In short, anti-mask agitation isn’t really about freedom, or individualism, or culture. It’s a declaration of political allegiance, driven by Trump and his allies.

But why make a partisan issue out of what should be straightforward public health policy? The fairly obvious answer is that we’re looking at the efforts of an amoral politician to rescue his flailing campaign.

The economy’s partial snapback from its plunge early this year hasn’t given Trump the political dividends he hoped for. His attempts to stir up panic with claims that radical activists are going to destroy the suburbs haven’t gained traction, with voters generally seeing Joe Biden as the better candidate to maintain law and order.

And it’s probably too late to change the views of the majority of voters believing that he has given up on fighting the coronavirus.

So his latest ploy is an attempt to convince people that the Covid-19 threat is over. But widespread mask-wearing is a constant reminder that the virus is still out there. Hence Trump’s renewed push against the simplest, most sensible of public health precautions.

As a political strategy, this ploy probably won’t work. But it will lead to a lot of unnecessary deaths.